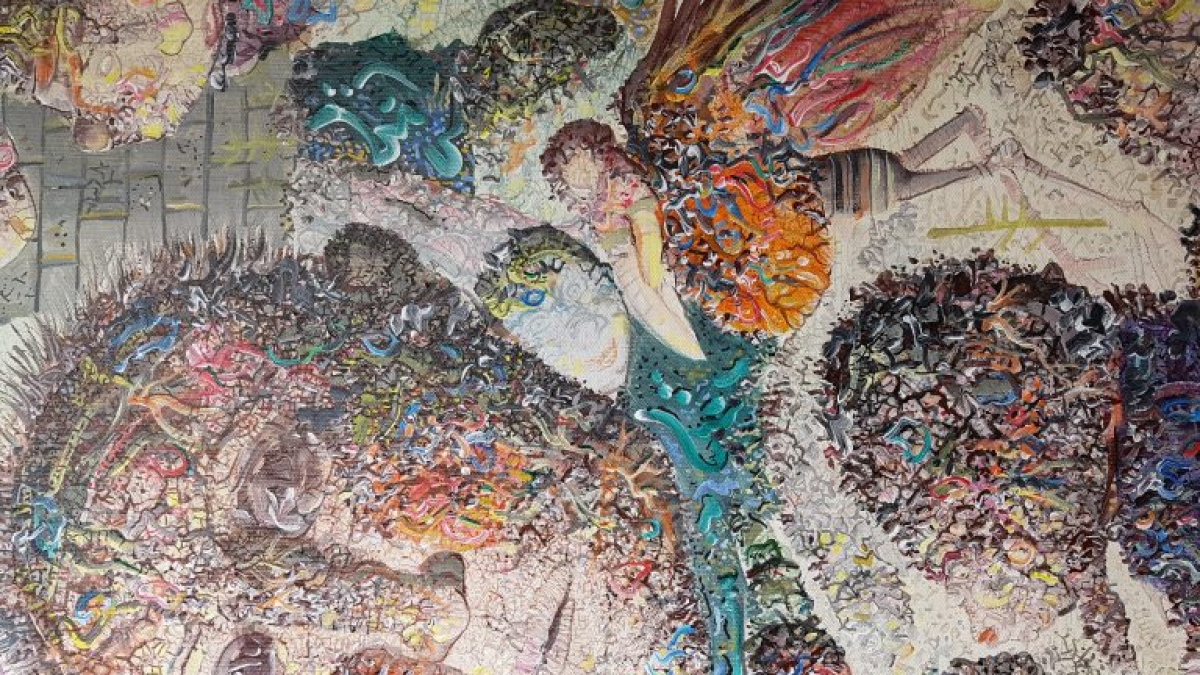 Art critics have also written somewhere that Žugić belongs to the artists who have been looking for their expression for a long time. I don’t believe this. Sometimes, in fact, we know for a long time what is inside of us, but it takes time to look at this, to dare to face it. And when an artist is said to have been searching for his voice for a while, it actually means that he has  kept it to himself all the time and gone through life hiding from himself and the world the scream that has constantly existed within him.  The more complex the mysterious worlds are, the more difficult it is to bring them to the light of day. And that’s why the creatures from Zoran Žugić’s dreamtime reveal themselves in colours pleasant to the eye and the soul. To tell us the truth about their being around, amidst the beauty and tenderness, the hidden, entwined abysses. We can close our eyes in front of them, we can pretend not to hear and not to see them, but they are here and they are part of us. Some may only dream of them and the next day they will wake up with a desire to suppress this dream as soon as possible, unaware of the fact that the bird which appeared in the dream was once a tree, which used to be an eye, which used to be a shell or a tentacle. We’re going through our lives unaware of all the archetypes that are walking along with us, deep in our mind. Everything that has ever happened to each of our cells, all that inside us never stops telling its story. If we say that Zoran Žugić’s paintings speak precisely about that, the archetypal memories of our each individual cell, each atom that we own, will that make any sense? I don’t know, but it seems to me, in light of my own tentacles and wings, that I’m out there on the trail of the truth about this painter. He deals with something that most people consciously or unconsciously overlook, regardless of whether they are artists or not. He deals with what we bury inside us, cover with concrete, with iron lids and lock with large padlocks. The world is in these pictures like a giant womb inside which we are continually being born, floating on greenish clouds. Here and there we can perceive a door, but it is not certain that we will ever pass through it. It is not certain, because on that long road of existence certainty does not exist. Certainty is a category invented by people, to feel more secure, just like the truth. These images also reverse many other concepts that we love to hold to, in order to have some kind of support. The beginning and the end, let’s say. But then you’re standing in the studio and you realize there’s no beginning and no end. You’re the starting point of the painting, you are just one of the possible points, and beyond that, the bodies of all living things interact continuously and are impossible to separate. It is impossible to discern where one existence begins, and another one ends. To get your breath, you dive sometimes in the colors, and then again you see some eyes looking at you or feel some of those little hands touching your cheeks. Every time I count the fingers on those hands. For some reason I have always expected them to be more or fewer than five, because five is for a man, and what lives there cannot be just a man. Because, really, from a cricket’s perspective, how important is a man actually? It’s just one of the thousands of questions that something inside me has asked me, here, in Žugić’s studio.

Finally, let’s go back to the facts which are of importance to us, transient people. Zoran Žugić graduated painting at a prestigious Academy in Paris, and art connoisseurs claim and that it has given a kind of stamp to his work. I am mentioning this information for those who value this sort of biographical data. He is, at this point, 65 years old and has a lot of exhibitions all over the world. He paints in a beautiful studio in Zemun, with pine trees’ shadows coming in through the big windows from the yard outside. And there, in that place, the worlds await for which absolutely nothing that is happening in the streets outside can prepare you for. You simply come in and you know you’ll never come back the same to what you have called your life.

From the  texst  „Writers about painters“