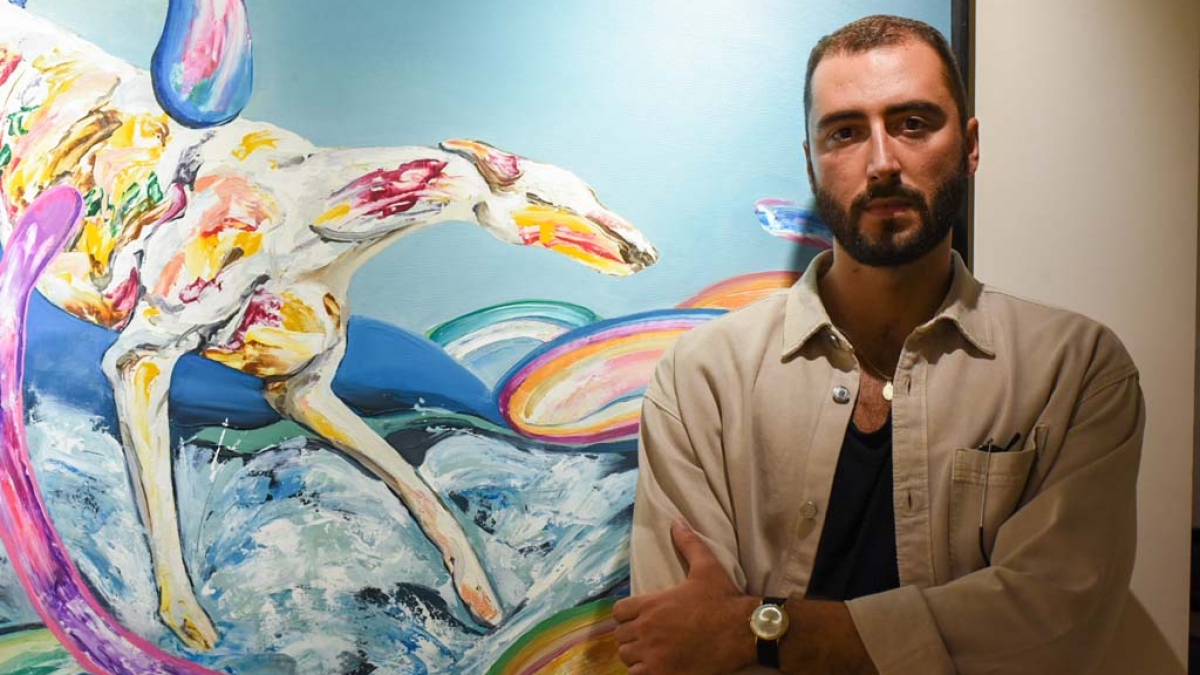 Man is the only creature that refuses to be what he is.

The painting “Observer” was created in Krakow in 2020, when Vladimir went to Poland to study for a doctorate. The painting is a logical, conceptual and emotional continuation of the painting “Camarade” and other paintings from that series created in Belgrade in 2019. The “Observer” experienced the culmination of a playful, elusive movement through the dynamics of figuration, while in the previous painting “Camarade” remained in the shadows with his passivity, calm attitude, a tense moment was captured that hints at the apocalyptic content that follows, realized in the next work. The general of colliding energies, figures, movements, colors encourages confusion in reading the multiple symbolism of work (painting Observer). The nervous and pessimistic tone, about fear or lethargy, about uncertainty and helplessness, which cannot be deceived even by the fluorescent yellow raincoat, the face of forced optimism, subsides before the storm of unstoppable and unkind situations. The observer-tourist, through the lens of the camera, remains only the observer of his life, and of other’s city, he documents unknown due to inconveniences that happen or have never stopped happening. The banal phrase “that misfortune does not go by itself” takes on a more serious character, it is an epithet of a fear and feeling that speaks of the banality of one’s own ego and sense of power.

The figure of the dog, the ubiquitous motif, the metaphor of pride and vanity, again problematizes the level of misfortune and evil, on a scale with a large range. Our faithful sins, our weaknesses become minor in relation to some new challenges, so the value of evil and misfortune expands by escalating and shocking, playing the card of surprise (painting Observer). It also introduces the shark figure where it maximizes the predatory character of life and opportunity through the meaning of this entity. The glorification of the bad has been replaced exclusively by artistic research, by polarizing painting skills through two paintings (Entering the Ether I and Entering the Ether II), completely differently artistically constituted ones that follow and realize further artist’s research. The first (Entering the Ether I) is painstakingly dense, expressive in its fullness, it overflows, dissolves the mass, destabilizes the form, which turns into a dissolved and undefined aggregate state. While the second (Entering Ether II) is sleek, precise, linear and voluminously tailored, pastel colors are contrasted with strong, flashy, even fluorescent tones. The theme, frame and idea is what puts two works in the same context of contemplation. The deformation of the form imitates metaphorically the transition from one state to another, from one sphere to another, from the external to the internal, from another to one’s own. It is intriguing to change the focus and perceive the external through the internal, to distort the perspective, to dissect the skin and tissues, to plunge into the self in order to understand the general.

By painting widely established Hollywood or sports stars, Vladimir deposits the characters of his heroes. Due to the admiration and fascination with persons with a built-in status, the characteristics and value system of both the subject and the object of admiration are equally considered (painting  Gianni Agnelli, painting Henry Cooper, painting Marlon, painting Sean). The portrait glorification of other people’s heroism and exceptionality through the need to empower the same in ourselves is an unstoppable aspiration to allow someone else to allow ourselves by recognizing other people’s victories. Substituting one’s impotence with someone else’s success is a kind of stimulation and a positivist philosophy that every peak is conquerable, and that can also be an emotion. Which is the most difficult to discover, heal, paint. The artist decides for indefiniteness and stain, making it difficult to read the rhetoric of the expression, eyes, the face of the person portrayed, and symbolically indicates the loss of the personal, the individual in certain situations, beyond recognition in the mirror, in the painting, in the inner monologue.

The painting “Initium” is created after the painting “Observer”, according to the template – a photo from the set of the movie “Memory Affair”. Every beginning is beautiful and short-lived. The poetics of a classic Golden Hollywood scene speaks of idyllicness, mild pathos, and short-term emotionality. Capturing and freezing an ideal moment both in life and in a film or picture is burdensome and captivating. The frame may be romantically balcony-like, full of swirling energy between two figures, and in the background a starry sky or a cosmic scene. Here, too, the artist’s revelation of emotional sensations is present, playing with forms and texture, dissolving.

The background of the paintings that the artist prefers and calls “amorphous ambiances” are spaces of banded splits that gently flutter among the stacked dimensions. Microscopic cross-sections of tissues of different textures or floating forms of amoebae suggest an interspatial vacuum of various realities. The artist skillfully arranges various fragments and stylized surfaces of soft shapes into an abstract free scene of clear harmony. Differentiation at the artistic and painting level performed through pastoral or lighter transitions, alternating different strokes and surfaces make the heterogeneity and structure of the painting itself more complex. The gradation of the plans does not expose the depth of the space, but remains on the applied layers that exist in the surface and not in the depth.

If we try to neglect figuration as only a means of exploring the painterly impulse, playfulness and arbitrary destabilization of form nurture the abstract image. The subject of the painting is thought, attitude, and emotion, which are in themselves abstract as well as the form it represents in the works. The artist manages to elaborate the idea of ​​transition to other dimensions and spaces through flatness, which only makes loading the work in a certain direction more exciting. Additionally exciting, because these spaces are emotional and spiritual, they are in every soul, near and too far.

Our most important goal in life should be to elevate our soul. In other words, the progress of our spiritual and moral powers: to enlighten our spirit more and more every day and to feel more and more free and better every day.