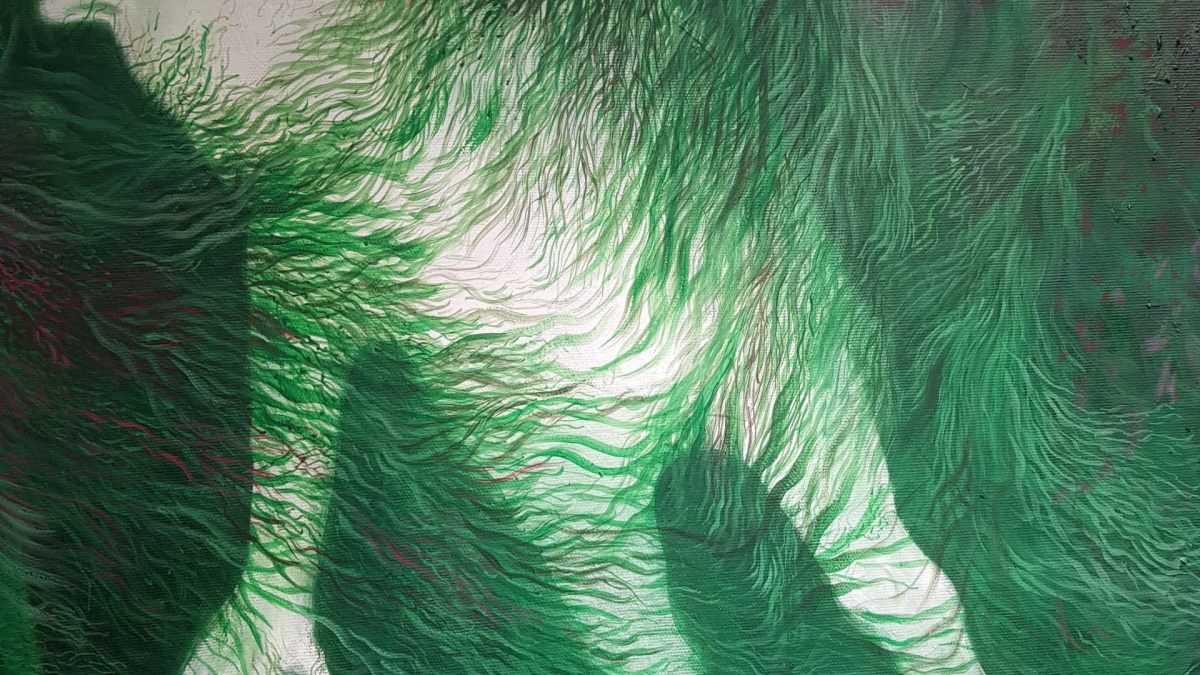 The verses of the song Rosa Canina (Milosav Tešić) resonated on the first canvas of this series of paintings, exactly as much as the artist allowed them, and he discovered some new themes, both of the female nude in the formal sense and the symbolic heritage of the female figure,  the whole entity women through epochs. The name of the exhibition “Portrait for Odilon Redon” implies only Veljko’s intimate inscription and the act of respectful attitude towards Redon’s work, all other doubts are part of a game of seduction and provocation without a banal comparison of the two painters. The titles of the paintings indicate that Veljko skillfully juggles and rejects the possibility of their literal and direct reading, redirecting the audience to their own loading of meaning. The names are not key to the reconstruction of the idea, but are marked by a spontaneous act and a random choice of the artist and thus enter the sphere of the subconscious (selection). The manner that he nurtured earlier through the themes of religion, where there were no typical reading of religious themes and iconography, but we interpreted it outside the context of collective salvation and socially established categorizations, and strived for self-analysis, self-observation and personalization of faith, continues here. Formerly on the thin line between religiosity and philosophy, flirting with the emblems of religion, and now with the inexhaustible theme of women, he seeks his philosophy.

Adam was just a man – and that explains everything. He did not take the apple for its own sake, but because it was forbidden to him. If the snake had been forbidden to him, he would probably have eaten it too. ( Eve’s  Diary, Mark Twain)

In the paintings of previous exhibitions, he started from death, suffering, torture, sacrifice in order to redirect himself to resolution, development, creation, from conclusion to question, and the artist still does not stop asking himself. Acceptance of defeat, mortality, sin, strategically leads to stratification, outside the comfort zone. Veljko’s focus is on the inner body of man, on the mental existence and his own impulses of living. He deals with the horizontal and vertical stratification of existence.

Lot of details and symbols seemingly emit the absurdity of indulging in the colloquial revelation of the artist’s intention of what he wants to tell us, yet we reserve the right to freely choose our own key to decipher the reading.

I have come to believe that the whole world is one big riddle, basically harmless, which we have solved with our stupid attempts to solve it, assuming that it is based on one great truth. (Umberto Eco)

There is an indisputable dose of ambivalence that expands in various forms through the works, the ambience of the landscape in which we are not sure whether we would step at all or sink completely. Creepy or liberating atmosphere, lyrical or cathartic landscape, or it is an ambience deep inside us, so “far” that it is difficult for us to accept that part of ourselves. Present or sometimes formally abolished figurality, while its presence is silent. Figures are thoughts, ideas, innovations, like whiteness-light that shines, because man is a change. Body positions are varied, levitating, falling, enjoying comfort or looking for their ideal position, as well as every human journey interwoven with different and turbulent intensities. The landscape and the atmosphere of green are the carriers of feelings, states, frames, circumstances. In addition to difficult and complex narratives, on a formal level the painting is quite refined, dominated by figure and landscape, which can be treated as synonyms at the end, because painting a landscape, closest to man, painting the landscape of the soul, landscape of the inner, figure inside, the artist is summed up the research of the basic.

Antipodal language of manuscripts, fragments of male and female figures, color contrasts, confrontation of green and white, atmosphere of pleasant and unpleasant, hints of end and birth, indefiniteness of space and time, strengthens the dynamics of painting skills and intellectual impulse.

The hints of the female body (paintings The fruit of imagination and Instinct – Mistress of darkness), entering the sphere of the female, only in segments, allude to this volatile, vague, mystical, surprising nature of a woman. The present sensuality further undermines that impression, yet the artist’s aspiration transcends sensory impulses and explores what is behind of sexuality and instincts, and even the mirror symbol does not demystify the narcissism, the postulate of beauty but enters the realm of the ontological. The reflection in the mirror (paintings The fruit of Imagination and Portrait pour Odilon Redon) is not physically logical because it questions what is behind what should be in the mirror itself, what we see, or we are just used to seeing, and on a metaphysical level what is true – what we see, think or feel. All these questions, both of the artist and the observer, do not stop, like water that is in constant flow. In the pictures, however, it is swamp water that is stagnant by nature, or we are the only ones who perceive it superficially. A very clear and frequent symbol of constant movement, are ladders on the paintings (paintings Prayer, The virgin source, Boy and the ark), here as a symbol of spiritual and immaterial movement.

Despite the individual reading of the paintings, our persistence to translate each phantasmagoria with the language of the rational, it is irrelevant to sporadically underestimate the meaning, because Veljko strives for the general totality  of his art. Each image is a unit and part of a puzzle in the search for universal meaning, absolute truth and knowledge. The tragedy of searching, the comedy of the found, the mystery of a woman or life, levitate in the undefined space of our spirit, in different shades of green.

„Thus, the most educated man in the city was also the most miserable. A huge treasure lay in it stacked and unused, and it was worse than not knowing anything. Or he was more unhappy because he didn’t need anything, nothing concerned him, and he didn’t care if he knew anything or not. Although it is not clear to me whether the images of imagination in him would have been more vivid if he had known less. Or his knowledge made them nobler. I just wondered, for no reason and without need, because the answer, even if it were, doesn’t matter. Surely no one would learn or acquire knowledge so that his opium fantasies would be richer. His everything is a secret.

He is completely walled in, like a mound. You don’t see anything in him, he doesn’t say anything about himself.” (Fortress, Meša Selimović)