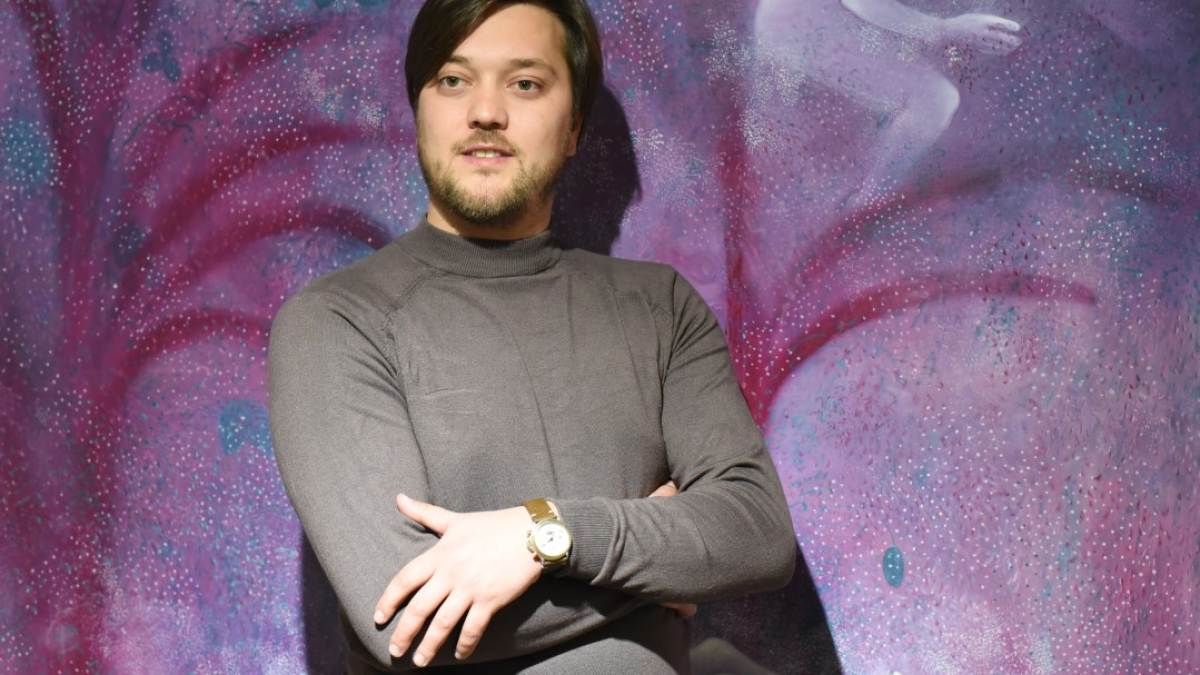 As soon as we thought that Veljko Valjarević had buried himself in his heavy, poisonous green color, in his anthology paintings, such as the large-format painting “Anamorphosis of a Dream” from 2021, this artist from that heavy, poisonous green color, by which was recognizable, now it turns into an opal pink tonality that is certainly a hint of a hidden fire, a fire that has yet to be ignited. Admittedly, pink color was present in the paintings of this artist before, but only as an accent. We discern in the new cycle of paintings by Veljko Valjarević an enthusiasm that heralds a new beginning in his painting practice. The pink color now in the painting field of Valjarevi refers to the pink passions and lusts that beset man, to the wild and unrestrained sexuality that Thanatos stands against. Eros and Thanatos are actually one, because death haunts every passion – that’s what this artist wants to tell us with his new paintings.

Let us remember that Ljuba Popovic also had a whole cycle of large formats in pink tonality. Those were paintings made on the island of Vrnik, and they have a special pink, Mediterranean light that never returned to Ljuba in such a form. With Valjarevic, the pink color is of a completely different nature – it is deeply tristful, somehow more cloudy, earthly-wine, and not airy like Ljuba Popovic. The pink color brought a dreamy, surreal atmosphere to the new paintings of Valjarevic, freedom from the toxicity and heaviness of his heavy, green paintings. In his new paintings, it was as if a different coloristic flame was ignited, while the iconography remained the same. Although almost monochrome, the painting of Valjarevic is richer in color than the paintings of some painters that scream a multitude of colors, because his painting has matured to the point of fermentation.

Everything in the new paintings of Veljko Valjarevic is in some kind of nostalgic haze, on the edge of the real and the dreamy. Bodies are rounded and soft with the hint of saving wings bestowed by Eros. With a new cycle of paintings, Veljko Valjarevic deepened his obsessive world, wanting to see some hitherto unexplored areas of his esoteric intimacy. The special quality of these paintings is represented by a warm lyrical and musical soulfulness and evasiveness. It is a painting world that softens and calms down in the blue-violet-pink palette. And it is exactly this lyrical elevation and voiceless silence that give the paintings of Valjarevic a sense of spatial otherworldliness and metaphysical mystery. In the paintings of Valjarevic, there is something of the thinness of the painful caress of flowers under the snow in spring, there is something of the tactility and vulnerability of the caress of the sex, something of plant dressing and coloratura fluidity. In the work of Valjarevic, the tree is stripped bare and mentally evoked, placed in a timeless space and forgotten silence. It is a magical, motherly tree that loses all naturalistic features and takes on a layer of temporal and mythological symbolism. After all, we must not lose sight of the fact that, according to cosmogonic myths, it was this mother tree that gave birth to human beings.

The color pink is archetypally associated with what is in the underworld, and those are the instinctive fires of passion. The painting of Valjarevic supports instinct and an underground fervor more than reason and cerebrality. Particularly impressive in this pink cycle of paintings are the deep twilight shadows that dramatically elongate the figures. “Crucifixion”, “Icarus”, “Blooming”, these are all large-format paintings that dive into the unlit layers of the subconscious and the depth of a personal mythology. Valjarevic goes further and further away from the narrative-emblematic component towards an immanently mystical content that is almost abstract. In the field of painting, the firm fixation of trees, plants, figures and dolls as simulacrums of women was avoided, so everything floats in a cataleptic state between dream and reality. That is why the scenes of Valjarevic resemble those scenes we see in our dreams.