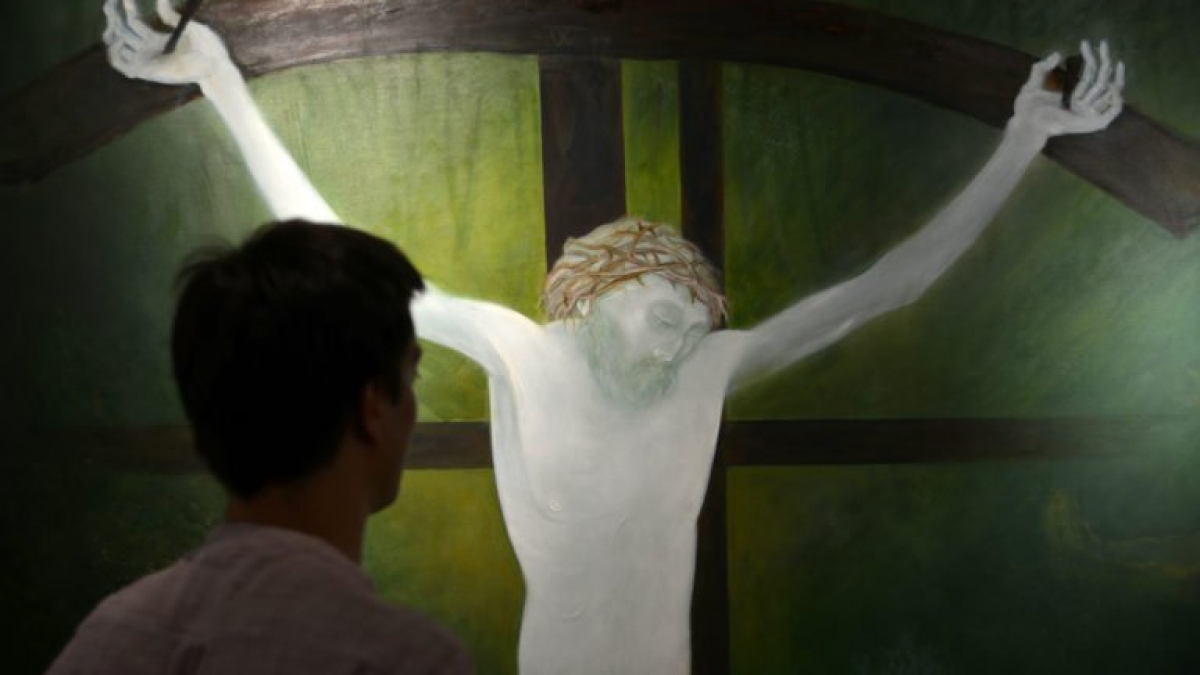 The first notion that occurs during the observation of Veljko Valjarevic’s work is discordia concors, or in other words, combining the incompatibles. It is present in the etymology of artwork, such as The African, Orpheus in the Japanese garden, but also in the pieces themselves, like The African, who is fair-skinned. Although it stands for the combination of conflicting elements, discordia concors does not negate their compatibility, it only points to the elements which are incompatible at first glance, since the African is stereotypically black, but he could be albino too, couldn’t he? What’s more, the African could read the myth about Orpheus in the Japanese garden.

In the mid of the 20th century, a postmodernistic parody religion called discordianism originated. Based on chaos, it mainly consists of capricious and absurd ideas, which are claimed to have a deeper meaning, however. The Principia Discordia contains a law according to which Forcing the order = Escalation of chaos. The main pairs of opposites that are emphasised are order – disorder, constructive – destructive, whereby e.g. the term “constructive” yields not only constructive order, but constructive disorder as well.

Exactly that kind of constructive disorder is often found in Valjarevic’s work. Seemingly, it is a disorder, but then again, is it? Perhaps it is a perfect order, but in a different state, such as trance. If that is the case, this artist’s work can be considered epiphyseal, since the epiphysis cerebri (Glandula pinealis) is a gland in the brain, located between the cerebral hemispheres, and it is secreting melatonin, in charge of regulating sleep/wake cycles and the trance state as well.

Or maybe it is not epiphyseal, but simply provocative? Let’s take into consideration solely the exhibition title: “Letters to Antonio Segui – abjection”. Abjection is a term used by Julia Kristeva and it basically stands for disgust or rejection. The artist dedicates his exhibition to Antonio Segui, but he appends a term that stands for loathing, or even rejection to the title… Does the artist reject the work of Antonio Segui or the letters are the ones that need to be rejected? Do these two artists have a meeting point or everything is an absurd word play?

Truth to be told, Valjarevic rejects and does not reject Antonio Segui at the same time. He rejects Segui’s horror vacui, which seems to be repulsive to him because of the overflowing, but likewise he finds himself in the work of Segui. Segui’s pedestrians walk towards each other, but do they encounter or they are nothing but mute passengers with caricatured physiognomies? The characters are not meeting each other in Valjarevic’s work neither. They are present, often next to each other, they can, but do not have to communicate; their gathering in one place is the thing that matters. Segui’s pedestrians/passengers are frequently not bound to the ground, as well as the characters of Valjarevic. The people are present, but also absent, maybe confined in their little, shallow world, or on the contrary, very thought-out and worried. In Segui’s work they wear hats, suitcases, suits. They are put together, but in the abundance, they end up very isolated.  In Valjarevic’s paintings, the characters are visibly isolated in an often undefined space. Mainly, they do not own suits, briefcases or hats, but one character not only owns a hat, but has an umbrella as well. Is this the relation with Segui? What is under the hat or umbrella? Besides that, what is inside the briefcase or suitcase? Valjarevic says: “My suitcases are my paintings, a packed creation of a spirit”. And what is the suitcase? The suitcase is the replacement for a box or a chest in which valuables are kept. But a suitcase is significantly lighter than a chest, so it provides easier transfer of its contents: Omnia mea mecum porto or all that is mine I carry with me…

Every piece of art is a screen through which we observe the artist and his world. Some worlds are shallow, and when we watch them, it is like some sort of a TV soap opera; meanwhile, other worlds are often unreachable, but then again, they give us the possibility of insight to their vastness.

The art of the 20th century has taught us that the resolutions to questions set by the artist do not have to be present, and they do not have to even matter, since the point of everything is in the game: in the empirical game through which the observer passes by, but also in the game of the artist with himself, the world surrounding us, time and space, colours and contrasts, figures or forms…