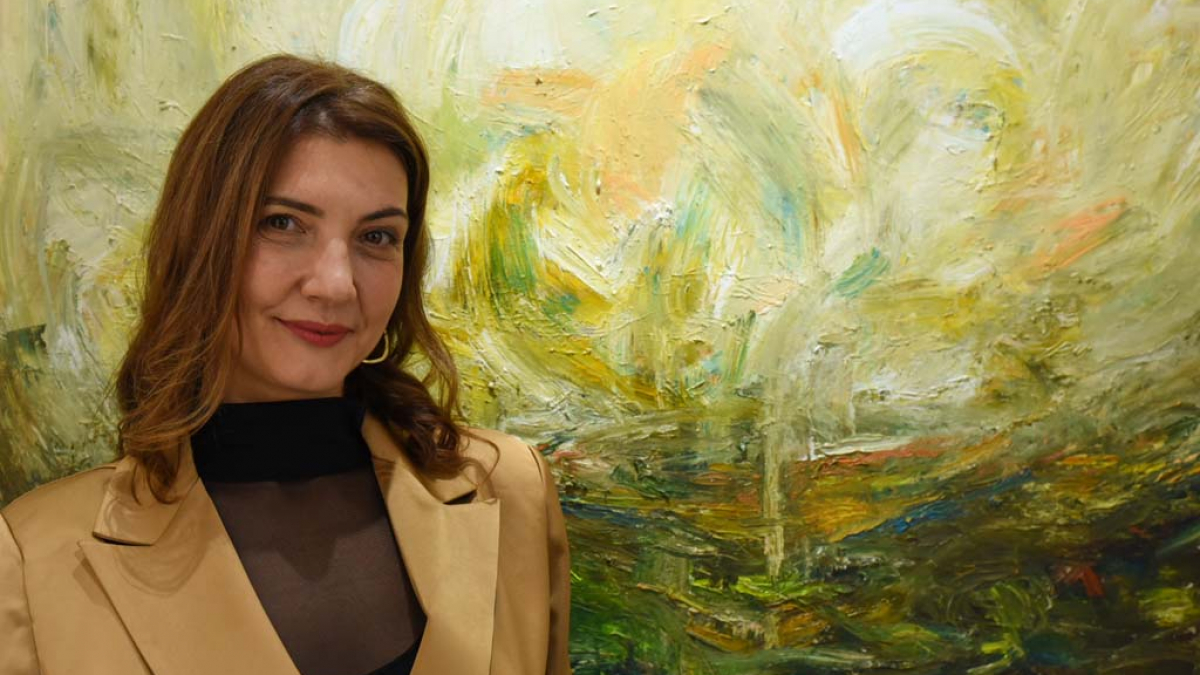 Due to the association behind the name and the direct reference to Beuys’s work, these pictures (pictures in a classical, formal sense) are backed by the corpus of conceptual art. The use of the melodic, humorous quote from a much older work does not detract from how relevant or provocative it is today, provocativeness that the artist skillfully flirts with in a more subtle manner. Of course, it is common for an artist to take a second look at their work, to explain and affirm it to themselves so that they could greet the audience with the clearest idea possible—an idea that they will try to show, to express, and to convince the audience of the work’s sincerity. That is a long and complex path, as it treats painting as a way to freedom and emotional expression, it is full of obstacles and dilemmas, of rashness and unpredictability.

The works presented come from three existing sets: Libertas, In Creation, and Love.

The first set, Libertas, is comprised of seven paintings and it was displayed at the Drina gallery in 2018. Seven paintings, seven planets, seven sins, seven ways for the artist to contemplate, explore, refresh, and relativize the concept of freedom. Freedom is intriguing and inspiring in its self-contradictory nature, and Marija found it logical to present its general seductiveness and endless potential in a larger format. Many are the freedoms that tempt us to conquer them—they are personal, collective, physical, mental, artistic, metaphysical. All of them are locked away and inaccessible until we manage to grasp them, overcome them, take them over. The brush strokes are intense, unrestrained, rash, dramatic, and wide, they do not allow the line to show itself in full. It is one chaotic whirlwind of a battle for color, its potency and its dominance. Expression and abstraction in its virtue have repressed that figuration. Marija’s freedom lies in her painting, as immense as an idea, as a planet, as space itself. Just like every planet has a positive and a negative aspect, freedom is personal, if we dare to decide by ourselves whose influence we’ll be under. (Works: The Moon, Saturn, Jupiter, Venus).

Regarding the Libertas set, Dejan Djoric has written the following:

Her conception of a painting is not external but internal, she creates in a trance, personally experiencing each painting. The size and format of each painting are carefully picked, the series is planned out, and the artist wishes with all her might to enter the painting, even physically. She is her work, which brings her face to face with visions of great psychological strength. The many underpaintings, the layers of a painting’s essence, are reminiscent of the golden days of both classical and modernist art. And though the painting may have originated in passion, her colors express painting at its best, and she sees the lack of freedom in the largely technical and formalized art of today. (Excerpt from a catalog article, Dejan Djoric, The lack of freedom as a direction in fine art, Drina gallery, 2018.)

The second set, In Creation, was created and put on exhibit in the Grad Cultural Center. It is precisely this noun, creation, that quietly alludes to the cessation of processes that we would ordinarily describe using verbs, so the greater process could be calmly observed. In this open space, the artist had the courage to reveal her creative processes, from the conception of the idea, its placement in specific contexts, to its very realization. One dimension to this is the artist’s encoding of thought processes into the material, and another dimension is the observer’s own interpretation of it amid individual contemplations and free associations. Marija’s works describe the complexity of such diverse processes, as does her focus on lines that will be the tool by which all dilemmas will be illuminated. Marija utilizes the elasticity, the fluidity, and the adaptiveness of the line as an artistic tool to materialize ideas that originate in the corpus of the subconscious, which contains an abundance of heterogeneity and diversity.  (Works: Trepidation, Abundance, Relief).

The third set, Love, was also created and exhibited at the Grad Cultural Center. This set of ten drawings shows different fascinations and variations of this emotion from the artist’s personal perspective. She definitely managed to avoid the expected banalization that can result from the widespread mass exploitation of this term, disassembling it into its base parts, i.e., primal sensations. If we consider love as an essential and vital part of who we are, then it is only logical that Marija would boil it down to the basics, to symbols and lines, lines that are completely reduced, emancipated, and light. Here, the picture is a drawing, going back to its true origins, a picture in the form of a fragment of the concept of a greater whole. The strokes are clear, predetermined, fearless, gestures originating from the subconscious becoming conscious, from the moment that was preceded by the long process of discovery. These pictures, these drawings, are raw, they are cognitive and artistic ideas that are now self-sufficient. (Works: Bliss, Soberness, Excitement, Suspicion, Passion)

From the cosmic, the immense, the total, and the all-encompassing that is contained in one great idea (from the first set), Marija descends down to the unit of measurement in the final set, to a single piece of one big puzzle. From the general, the external, the universal, from Libertas, she arrives to the internal, the emotional, the ephemeral, the mysterious, to love. To a notion from which everything begins and to which everything intuitively strives to return and complete a circle. To Marija, painting is freedom, love, and spirituality to which the material world is subservient. Her artistic journey and its challenges would not be stable without the foundation of spirituality. At the beginning—freedom. At the end—love. Or are these merely synonyms that seamlessly permeate all parts of the process?