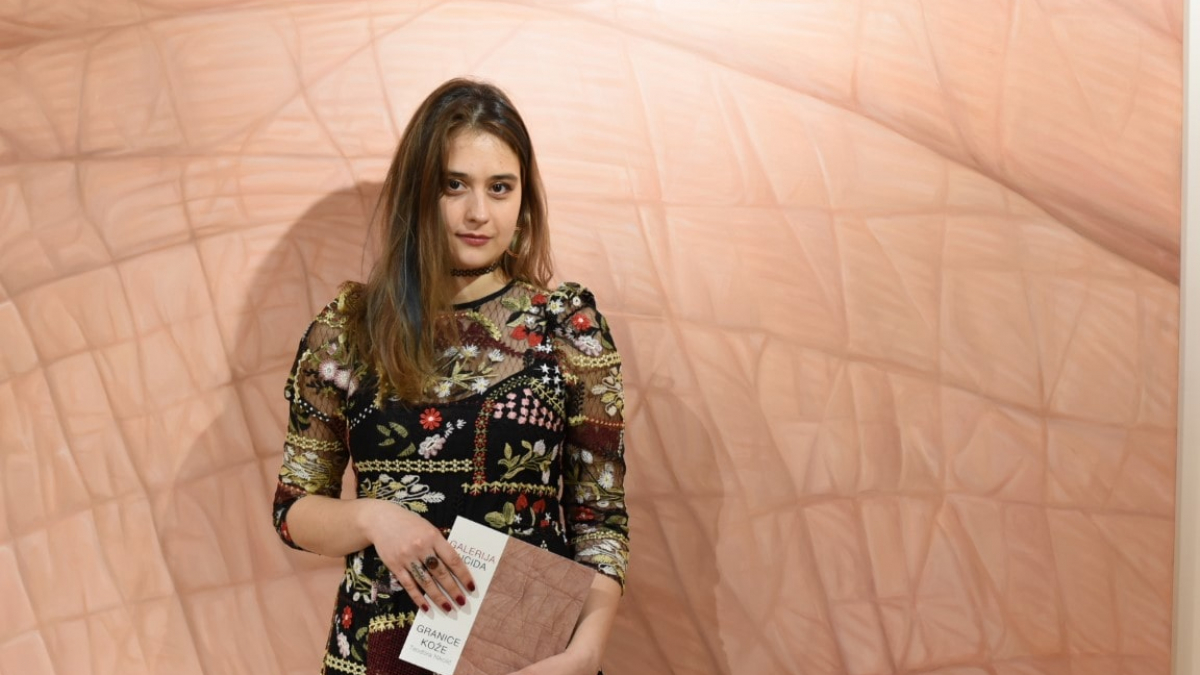 “Skin limits”, the name of the exhibition inherits two terms, which intertwine public and private. Borders as public, as physical or metaphorical, equally defend some form of sovereignty of the individual and the region in any space, material or metaphysical. Borders, in the wide sense, establish the right to freedom, and not confinement and claustrophobia, through a system of established rules, make a concession to a humanized system of functioning. The lack of borders is its relativism and susceptibility to manipulation, so its movements are possible and frequent. The included and frequent phrases To cross someone’s border, The border of pain speak only of human sensitivity to someone else’s usurpation of our self.

The second term, skin, refers to the private, the intimate, but by its exposure it agrees to the public. The skin itself is the border, visible and invisible, between two worlds, external and internal, a conduit of events and situations, it enables mutual influences, mutual permeation. Skin as a substance that breathes, absorbs, radiates, feels its surface. The largest organ, the largest surface – the skin. All anomalies of the interior are visible on the surface, they can be hidden, but they cannot be removed, they are self-marked permanently.

The painting as a living organism, in which all the conscious and unconscious contents of the artist are stored, footnotes of what has been read, clear and vague memories, concrete learned and incidental ones. All the dilemmas, ambiguities, lessons on the path of the artist’s research are recorded in one work, whether the artist wanted it or not. And on the skin of the painting, the artist has the right and ability to decide what will be visible to the eye. He chooses what he leaves and what he eliminates, skillfully searching for artistic elements and tools. The energy charge of the image itself has less influence, because the image-organism-energy itself has its own, absolute value. The materialization of energy is reflexive and unstoppable.

The enlarged, chosen motif enabled the artist different approaches, and made it difficult for us to decide for just one interpretation and explanation. The raster representation of the epithelium gives us an abstract image, which we approve or resent the artistic composition, playful with colors, tones, lines, valences. We are constantly re-examining whether the painting is conditioned by the photograph of an existing body or whether it is self-invented, self-sufficient, independent, conditioned by the autonomy of the painter’s arbitrary expression and will. There is a possibility that the artist chose an autochthonous, independent visual system with which to express herself, but that even in this way she hides a narrative, object or portrait.

Arbitrariness in the interpretation of images, seemingly abstract forms that can be landscapes or portraits, and least of all still life, because vitality is what is certainly present and not lacking. Skillfully drawn pores, lines, paths, veins, capillaries, print and illustrate one portrait, certainly one individuality because no two have the same skin and two same fingerprints. Such magnified scenes can also re-examine the universal, general, archetypal and genetic contents stored and emitted by the skin. It is ubiquitous to play with the visible and the invisible, with what we want and can or cannot hide, with the intimate and the public, ours and everyone’s. With great magnifications, the artist presents all the material of the deepest intimacy, where it is not about the nakedness of the body, she goes further in revealing both large and small scars of one body of the being. We must not overlook the factor of skin regeneration, strong intensity and when it is in itself, self-regeneration, or when initiated by the subject, the owner of the skin.

Our tendency to control the appearance of our skin is as strong as the artist’s urge to capture and notice a certain moment in his painting thinking. Because that moment, the stage, will be completely different in the next moment, due to the newly created contents and events. Theodora deals equally with the concrete and the artistic, she uses one pattern, one living object, then she manifests it magically, mysteriously, fluidly, elusively, magnified and inconceivable.