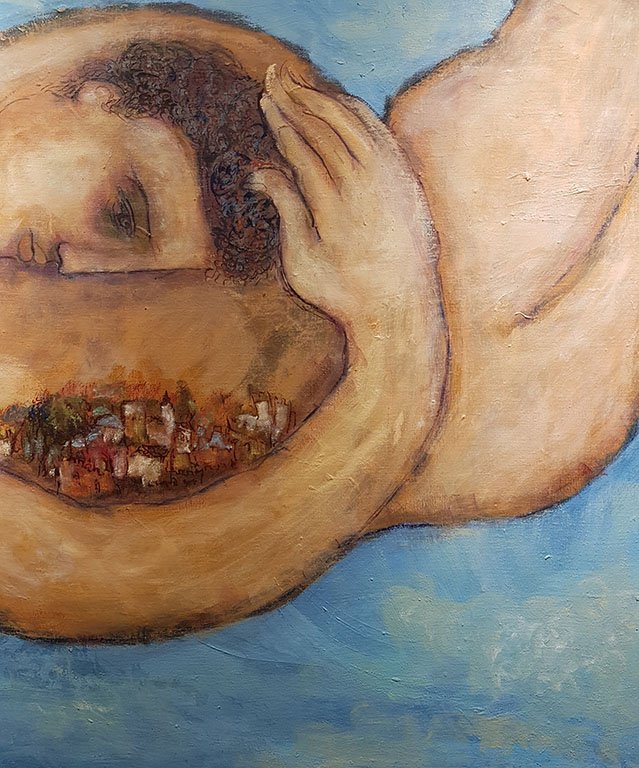 After numerous paintings of landscapes, which made her famous, painter Tatjana Tanja Pirović (Zemun, 1964) turned to pure figuration, presentations of naked male and female body. She not only revealed the sexuality of figures and faces with antique flat profiles, but also the secret of love, a mythical, lost world which exists in art more than in reality. Enchantment is a precondition for a true, unselfish relation between man and woman, which Meister Eckhart, German mystic from the XIII-XIV century, contemplated on, concluding that love is as strong as death. The secret of love, however, does not belong to Christianity only, and the painter symbolically presents it as a naked couple in love. She is not interested in the animal, sexual side of love, in the erotic, but in the angelic, which brings her close to Pre-Raphaelites. Naked couples levitate above monasteries, sailboats, phoenixes, violins, fish and pigeons, as details and symbols of love in the painting, and point out their ecstasy and faithfulness with long glances. We haven’t recently seen painting so pure in content and so original, noble in its intention and achievement and with a Mediterranean source. The entire Serbian, even Balkan art, from antiquity, Rome, Byzantium to modern art, belongs to the circle of Mediterranean values; Orthodox Christian frescoes and icons, as many experts emphasized, succeeded ancient Greek painting, just like Byzantine philosophy continues the Hellenic.

With her oils on canvas and board, exhibited at the “Lucida” Gallery in Belgrade, the painter opened a new possibility of an artistic, spiritual and life renewal. At the time of post-humanism, announcing the extinguishing of human and replacing it with the robotic, she confirms life itself, in an ancient manner, with painting closer to Fayum portraits than to contemporary art. Opposite to aggressive Islam and materialistic consumers’ west, she indicates antique and Christian virtues. Her return to the past, where she reveals pure love, is entirely modern: she possesses the experience of an artist from the end of civilization, a time when capitalism and neocolonialism jeopardize not only spiritual values, but also the very foundations of living. She is not attempting to follow trends and become one of the avant-garde ideological fighters for using incredible financial funds, with which the rich, democratic world washes its dirty conscience, creating an illusion of righteousness. This mythologist, in an internal manner, attempts to confirm humanness and naturalness by ascending man and woman, thereby ascending the art of figuration in her own, honest way, by using painting to present love, freedom and beauty. Thus she is more on the side of nature than any ecological experimenter, confirming it essentially, not just formally, just as she is on the side of the secret of marriage, home and children. It is necessary to return trust in the beauty of the world, in the holiness of art. In the time of general, not only human ill fate, it can perhaps be done only her way, with humility, without glamour and pompousness. The horizon of the future holds nothing but the certainty of crisis and apocalypse announced from different sides. That is why the most conscious and most conscientious return to the sources.

Painters and artists testify that we are living in the last days, but that magical alterations of reality are possible; a better world will perhaps no longer be a utopia, but a necessity, a need for survival. Tatjana Pirović found her solution for the enigma of the world, being at the same time outside of tradition and inside of it. After two thousand years, she came to the starting point in a contemporary manner, closing the great circle of creation.