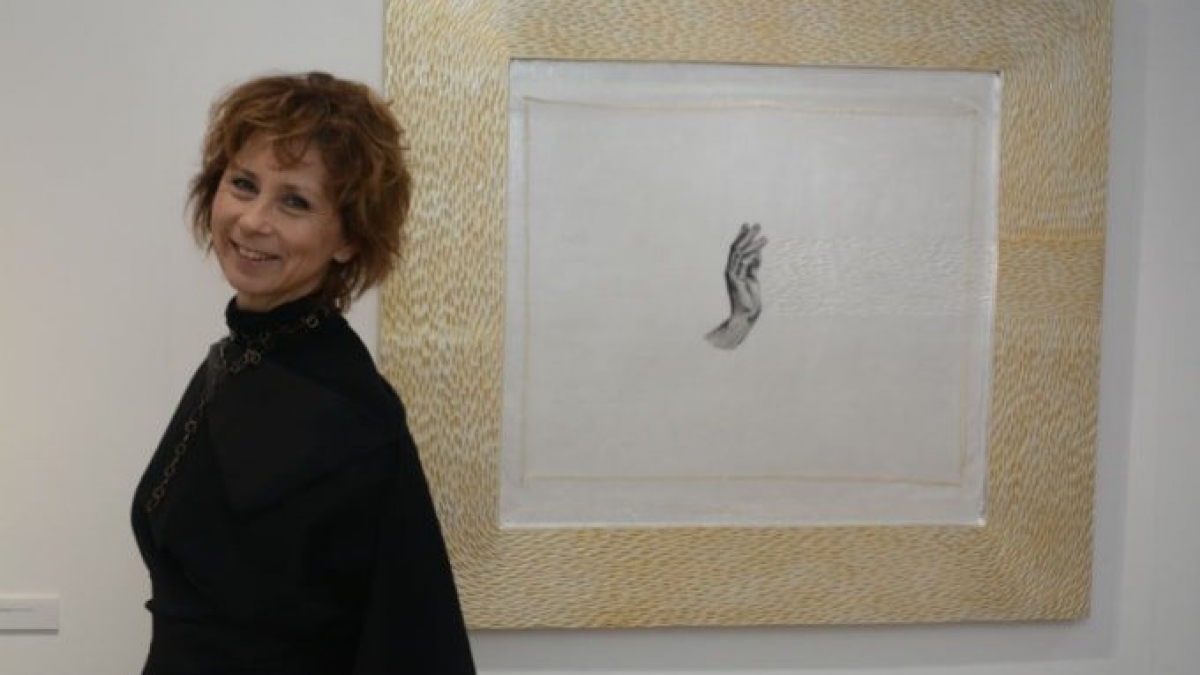 Within her exhibition Breathe deeply in the Lucida gallery, Tatjana Milutinović Vondraček displays a selection of her artworks from the period 2012 – 17. The exhibited works were created in mix media, mainly based on styrodur, with the use of ink, organza, metal sheets, pins and golden sewing thread. The artist says that the choice of materials allowed her to easily transform her ideas if she felt the need for a change.

The colour choice relies on the sacral fresco paintings – gold, dark blue and white colours prevail, with accents of purple. The motif of a hand in motion painted with ink on organza can also be associated with the sacral themes, primarily with the gestural, non-verbal rhetoric of Christ and the angels. Regardless of the shape (circle or rectangle) that stands in the centre of the composition, the organisation of the composition is dominated by a circular flow depicted by the specific manner of the elements displaying. From the hand (or from the centre of the composition) the energy flow of the tiny golden strokes repeats endlessly and, taking over the space of the artwork, conquers the entire surrounding area. In some compositions, this golden ray flow is spiral-shaped, creating, at first glance, the reminiscence of Van Gogh’s way of depicting the sky.

The artworks are characterized by the continuous repetition of their compositional elements: the identical strokes that shaped the beams, the golden thread needlepoints (Two portraits), the purple shapes resulting from the stylization of the images of two angels taken from a wooden altarpiece (Circle of Nicolas Froment, The Pérussis Altarpiece, 1480, Metropolitan Museum of Art), the motif of the hand represented in various symbolic gestures (The Hand That Gives, the Hand That Heals, the Hand That Protects …). Repetition of the same elements is present both within one and the group of artworks.

Tatjana’s artwork is influenced by the concept of different use of materials. The artist creates the symbiotic combinations of materials that complement each other with their differences and make each other to stand out. Their layering and sophisticated incorporation into a whole reveal the artist’s unique, distinctive sensibility, love and respect for the materials. The artist says that every material she uses in her artwork has to satisfy her (refined) sense of texture.

The golden and dark blue background indicates the connection to the symbolism of the heavenly world of medieval frescoes, to another, for us inapprehensible dimension in which peace, harmony, grace and safety prevail, a dimension entirely different from the world we live in. The repetition of strokes by which Tatjana shapes and transmits her ideas into the material represents a kind of artistic mantra, a prayer that brings calm, silence the artist’s reaction to the outside world, and liberates her creativity. Constant repetition of the same strokes brings protection, the mind knows that the moves that follow will be identical to those that preceded them, and thus is put into the state of performing the automatic movements which motivate the mind to calm down, and then give it time for creative thinking and action, separated from the manual work that brain regulates in the background.

The circular motions, spirals and vortices on Tatjana’s compositions invoke the symbolism carried by chakravarti (Sanskrit chakravartin), the source of everything, the universal ruler, or the “The unmoved mover” in Aristotle’s Metaphysics. This cosmogonic, spiral motion insinuates the movement of galaxies as an initial association to the creation of the world.

The stylized angels reduced to the level of signs arranged in the circular or spiral pattern in the artworks the Eye of the Night, and I Am Around You also point to the pulsating, flickering presence of the celestial messengers’ protection, but they differ from their originals in the original altarpiece retable not only by the stylisation of their features but also by roles they are playing and the playfulness of their setting organization rhythm.

Tatjana Milutinović Vondraček says that the motive of the hand has isolated itself in the process of work. According to Aristotle, the hands are “a tool of tools”, while Quintilian believes that the hands speak by themselves. For the artist, hands are “carriers of strong symbolism – they signify power, blessing, protection, justice, divine power. Their position shows mercy, affection, worship, appeal, surrender, envy, care, giving …”

The hand appears as a symbol of human or celestial being, speech, meaning … Since prehistoric period up to date, hands have symbolically represented cultural values and social beliefs in all communities. In art, hands can denote a symbolic representation of the person himself, his character and intents. Hands can be used as tools, but also as weapons; hands defend and attack; they create and destroy. Hand gestures emphasise, or even replace, the meaning of spoken words.

Within an artwork, hands can be interpreted on several levels – as a symbol, ikon, or indicator. They can have a referential or indicative meaning. Through the art history , the hand as a motif and symbol appears in all cultures and all periods – from prehistoric cave paintings in Lasco and Altamira where they had a ritual, cult significance, through antique rhetorical gestures accepted and incorporated in the early Christian art in which the motive of the hand mainly appeared as Manus Dei indicating the presence of God and his messages, Medieval art, Renaissance and Baroque, the periods in which the hand gestures, as a part of the corporal rhetoric corpus, are sometimes of the crucial importance for the artworks reading, to Auguste Rodin within whose artwork the hands became independent, by gaining their own identity and becoming the self-sufficient significator of God, devil or the allegorical presentation of a cathedral.

Hands can speak and, besides the face, they represent the only part of human body that clearly expresses ideas and feelings – hands point, command, scream in agony, break in helplessness, or lie calmly in the lap; they have their own character and beauty. In Tatjana’s artwork, the hands’ poses replicate the hand speech of Christ and angels. Tatjana Milutinović Vondraček also emphasises the hand rhetoric by the flow of golden beams that flows from these hands. All of Tatjana’s hands have incredibly positive connotations – they provide, protect, radiate, they are righteous and beautiful in their existence. They deserve to be honoured.

For a long time, artists have been seen only as mediators in transferring God’s acts and thoughts, as a means through which God, and not an artist, works and creates. Only since the Renaissance, the artists have taken the attribute of the independent creator. Tatjana Milutinović Vondraček’s artworks presented at the exhibition Breath Deeply rely on this Renaissance concept that the artist = creator = God. Instead of Manus Dei or the hand of an angel, Tatjana depicts her own hands in the gestures of non-verbal communication, taken from the Christian iconography. Her hands provide goodness, grace and protection. At this time when it seems to us that nothing depends on us anymore and that we cannot have influence on anything, but only try to adapt in some ways, mostly unsuccessfully and insufficiently, the artist transfers one part of the faith in God to faith in Man – we are the ones who bring ourselves the solution to situations and protection – we are Dei ex machina, the forces that appear suddenly and unexpectedly and provide a contrived solution to an apparently insoluble difficulty. If we are creative and ethical in our creativity, we become little gods who create, if not the entire world around us, then at least our microcosm, by our own will and our own idea.

Although every detail reflects a possible deep symbolic meaning, the essence of Tatjana Milutinović Vondraček’s artistic poetics is not symbolic, but emotional. She uses symbols only as reflections in a blurred mirror; they indicate the possible presence of certain aspects of the work, but do not define it. What determines the artwork is a new, specific spirituality arising from gratitude for the talent which allows the artist to isolate herself, to calm and to create. And that is the highest joy of one’s existence.