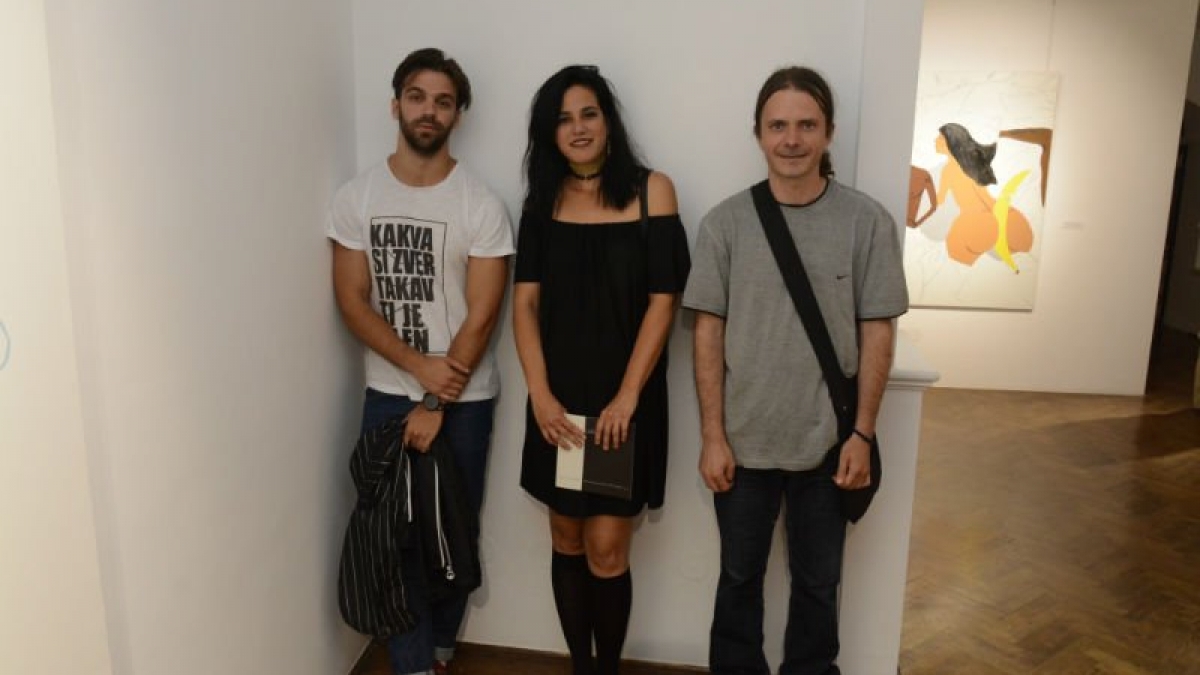 Visual artists presented in the exhibition “Emotions and Phantasms” share the expressionist style and a preference for traditional media – painting. Their oil paintings, based on the experience of the Neo-expressionism from the 80s of the twentieth century, provoke us to explore the emotions that occur as a result of real events or personal fantasies. Revealing intimate confessions and stripping of ego on canvases are familiar to all the authors.

Bogdan Stefanović‘s paintings are of large dimensions. They are characterised by the reduced number of colours, a simple composition and drawing similar to children or comic book. In his compositions, Stefanović displays figures of 3 – 4 people at most, as well as mythical creatures, fruits, vegetables and everyday objects. Scenes of nude men and women in bed (a remake of Kanye West’s sculpture Famous, which is also a remake of an oil painting Sleep by American realist painter Vincent Desiderio), a man and a woman on a banana, a unicorn with a purple mane from whose mouth comes out a rainbow, two different sneakers (again inspired by Kanye West, this time his Yeezy collection for Adidas) are some of the scenes that the artist presents. The influence of primitive art’s aesthetics is evident on Stefanović’s style, but there are much more of the Pop Art and impact of digital applications for drawing. The elements of parody by the mockery of modern “heroes” are also presented in some of his artworks. The vast, empty background carries only a few spots or lines with which the artist defines the space, and it is equally important to the composition as the figures.

In each of his works, Stefanović incorporates three elements: banana, tears and the word “dance”. Banana is one of the main characters, sometimes the only one, and obtains the characteristics of a human being; it can be a main narration protagonist or only a detail – in any case, it is always present in some form. The image of a banana is an image of the artist himself, a form of self-portraits, an alter ego. Banana, as a substitute for a self-portrait, suggests the artist’s presence (physical or emotional) in the depicted event.

Both banana and all the other characters have a tear on the face, which also acts as a symbol. According to the artist, it is a tear of joy, a symbol of happiness and euphoria due to the proximity of a loved one, fulfilling the dream or simply enjoying in the situation.

For the word “dance” which also appears written on all pictures, Stefanović says that “it represents a particular ideology. “Dance” occurs instantly. “Dance” is something you should feel, a way of life and a state of mind. In slang, it means something good, positive, good luck. It serves as a synonym for words like “awesome” or “great”. The pictures themselves carry that ideology and that atmosphere.”

Stefanović believes that ascribing meaning to everything is boring because by defying something one limits its meaning. There is always a way to perceive everything from the bright side, to experience, rather than philosophise about it, if there is no need for doing so.

Through themes inspired by today’s culture, the artist describes with ambivalent emotions the contemporary life of an urban young man. As a member of the new generation, Stefanović chooses iconographic motifs based on the value system of young people of today and in his paintings he builds a unique atmosphere of simplicity and happiness which he represents by the personal visual language. His works communicate directly with the observer, particularly since the artist is always present in his compositions directly or indirectly, through his alter ego, by which he literally puts a personal stamp at all of his paintings.

The apparently narrative compositions denote a subjective perception of the personal environment. The main iconographic motifs in Rodić’s pictures are human and animal figures and particular body parts (heads, hands, feet, eyes). Devoid of pictorial idealisation, her style tends to Naïve art. Rodić’s uses figures as a sign that indicates invented stories, events and intimate experiences. The portraits take on the appearance of artist’s inner character (or characters). Through their movements and facial expressions, the portraits conceive artist’s inner struggles and deepest emotions.

Figures of men, women and children in Tara’s compositions suggest mutual relations, but they do not entirely reveal them. Figures contribute to the building up a certain atmosphere in the picture that further refers the observer to the discovery of the initial emotion responsible for the creation of the painting. The composition Dinner in the Moonlight in many ways resembles the Luncheon on the grass, but the atmosphere that reflects is entirely different. Night, wildlife, birch-trees, a man and a woman, untacked meal, wild animals waiting for the remains of the food, all this denotes the uncertainty and anxiety of waiting. Although the man and the woman are already in a relationship, around them is still wilderness. Jammers depict poor communication and making of the unjust conviction. The sky with birds painted on the wall, as an illusion of space in a closed room, indicates the vision of freedom while, in fact, we are all in jail, on trial. The painting Subconscious and Ego presents the antipodes which together exist in each of us. The painting portrays the relationship between the various “selfs” of one person, anima and animus, Ego and Id.

The symbols in the paintings help the artist in defining the state of soul; they complete and encircle ideas. Symbols are bridges that connect the inner concepts to the real outside world. With symbols, Rodić does not represent archetypal images, but she unites the whole idea. The most common symbol on her artworks is the snake, which is also one of the first symbols humanity invented. The snake symbolises fertility, immortality, regeneration, healing, or a symbol of dishonesty and evil. At Tara’s works, snake mainly signifies curiosity, naivety, and fear, while ouroboros, a snake biting its tail, as well as a symbol of the circle, demonstrates integrity, end as a new beginning, and eternity.

For her artwork, Tara Rodić remarks: “The works were created out of the need for the understanding of my inner personality. Through the introspection of personal emotions, from melancholy to a state of harmony and happiness, I was getting to know myself. In this vicious circle of emotions and phantasms, I found the inspiration… Dealing with both my inner self and the psychological portrait, helped me in the understanding of a general inner portrait of the man…Grotesque portraits appearing on canvas are, in fact, the portraits of my inner being. They are the main characters in the intimate confessions that I paint. These images arise from the vortex of the deepest thoughts and sentiments … Portrait mainly depict the struggle between the outer and inner self. They present dualities – conscious and subconscious, male and female, good and evil, reality and illusion.”

Tara Rodić’s paintings embody a deeply personal and vulnerable candid confession encouraged with an introspective artist’s nature. They emerge as an emotional reaction to a psychotic time and society in which we live.

In the painting Fear of Being Stab by Cactus, Božidar Tabaković-Vlčev depicts the phrase “to hide in the mouse hole”, i.e. “to go underground”. Within the scene we see a pink mouse of large size, hidden in a warm sanctuary; at the right of the mouse, there is a cactus, which the mouse has turned his back on. Cactus is not aware of the existence of a mouse, but the mouse is pretty much aware of the potential dangers of being stab by the cactus pricks – therefore the mouse is in the safe place, serene and happy. Above, in the sky, three Suns and six Moons shine – the scene takes place on some other planet, in another world, perhaps somewhere in the universe, possibly in the artist’s imagination, the world where the dangers are the same as in ours, but where everything always ends well.

On his artworks, Tabaković-Vlčev presents fragments of dreams and fantasies – lands from fairy-tales, sumptuous plants, enchanting animals and manlike creatures arise from his paintings. Aiming to reject the traditional standards of composition’s structure, Tabaković-Vlčev is on a safe way of conquering the absolute freedom of artistic expression.

Božidar Tabaković-Vlčev style is characterised by a return to personal, subconscious, ontologic and primordial. With free brush strokes and thick covers of the saturated colours, the artist most often represents nature – gentle animals with human facial expressions, plants and people. At first glance, his paintings seem somewhat primitive or unfinished because they represent semi-automatic, spontaneous records. Artist’s return to the emotions that we had as children, careless atmosphere, as well as the consistent harmonies of bright colours and simple, distinct forms affect the vibrancy and directness of his works. There is an apparent influence of primitive art, cartoons and fairy tale’s iconography. All images contain a certain amount of humour, such as Marriage Proposal between Two Men, which can be understood in two ways, the euphoria of happiness or running away from horror. The depicted scenes describe the artist’s subconscious psychological projections and suggest daydreams and fantasies, which takes Božidar Tabaković-Vlčev to the domain of surrealism and fantastic art.

Our brains process an extremely high number of thoughts in an instant – most of them get discarded as irrelevant, never reaching the consciousness. On those mere thoughts and mental images Božidar Tabaković-Vlčev pays attention – before they got to be dismissed at the subconscious level, he pulls them out from the sea of information and transfers them into physical paintings.

With the exhibition Emotions and Phantasms, Lucida gallery presents three young artists of different sensibility who share the affinity towards expressionist style. The very concept of expressionism implies a literal exposing of subjective feelings and thoughts, regardless of the outside world. Artists are stepping aside from the conventions of realism and naturalism and trying to convey their inner experiences and deeply personal vision through the painting of distorted forms. Through a deep introspection, Tara Rodić examines her emotions that range from melancholy to harmony and happiness; Bogdan Stefanović concludes that it is better to accept the world as it than thinking too much about it, and he demonstrates that opinion of his by depicting his emotions of happiness, ecstasy and frustration; Božidar Tabaković–Vlčev returns to his inner world and subconsciousness and enjoys in a new understanding of life.

The exhibition Emotions and Phantasms emphasises the question that still has no definitive answer, and that is: Is the expressionism a matter of trend or sensibility?