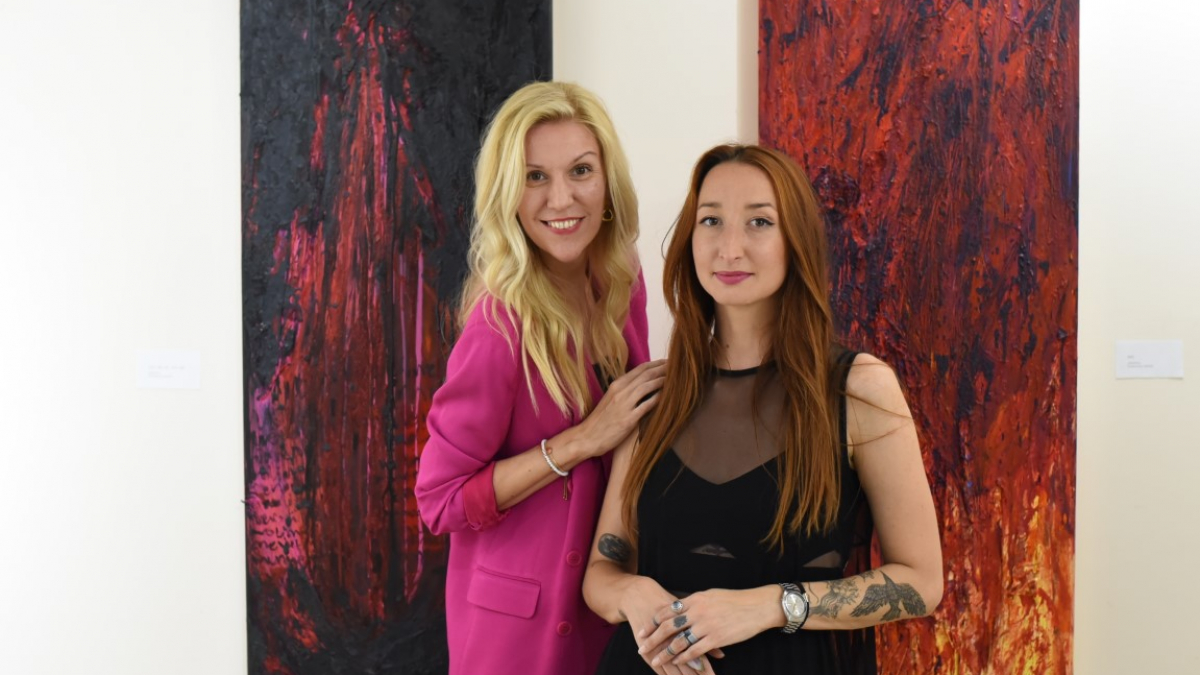 “Persephone’s journey” is a way of revising experiences, feelings, excitement, decisions, and disappearing. Persephone’s way is a cycle of moving through emotional and artistic states, actions, and activities on the path of cognition, which was preceded by the artist’s decision to face all the causes and consequences, which can be as painful as the birth of painting. Initiating sentiments and sediments of experience that ended conditionally in time, is a brave attempt to revive, for a higher artistic goal, for the idea and to pass through the needle ears of a painting procedure. Such an act might not be feasible and possible if the artist did not see one shade of the positivist, vital, invigorating in a timeless entity called love, in just one of many faces and shapes. The one worthy of life and death, both painting and man.

Suzana returns to that intangible place, to that meta space and the process of possibilities able to conquer it from another angle, now from a distance where it may be possible for her to be less biased. Both a man and an artist, only with deep introspection, can get closer to themselves again, experiencing emotions again, and at the same time move away, observing them. Being both a subject and an object of observation, she remembers and summarizes her reactions in repeated situations.

Until now, Suzana has been dealing with memories, a more passive approach, while now she activates herself, retroactively engages, and renews the processes in herself, so that she struggles with the painting during creation. Action in the field of emotions, impressions, and expressions is dominant, and everything is reflected in the act itself. It is becoming difficult to separate terminologically, so we can embrace several terms that would explain the artist’s aspiration, action painting, passion painting, and emotional painting. What is the common denominator of her work is painting, which in its original form does not give up. The presence of enformel in the abstract painting through the insertion, gluing and application of foreign materials gives the depth and conciseness of the final work. Gauze and wax with acrylic paints, bring and apply to the work both their physical and symbolic features, which the artist chooses not by chance. Visible materiality and invisible sensitivity of work are equally relevant to her so she pays all her attention to the choice of raw materials she applies, the method of production, but also the emotional harmony of her being with what has been done. The expression with which she creates the painting must be consistent with the physical and energy field of the painting, but also with Suzana’s inner impulse. She replaces heavy coats of paint, wax, and gauze with a gentle painting of the canvas. The torrent of emotions that overwhelmed the artist is expressed through an angry move, the weight of the coating, which makes the painting heavier, “burdensome”, so we have accumulated emotionality and accumulated materiality of work, while the color tone supports the whole construction. The multitude of content is skillfully balanced so that we do not mind because we believe in a sincere emotion that could not be expressed otherwise, or even restrained.

As each emotion has its own dynamics, at some point, the painting became gentle, elegiac, sad, anger replaced reconciliation, and confusion allowed for the truth. This had its reflection on the very artistic poetics of the painting, which came from the power of an eagle to the swallow’s ease. The layers of paint became thinner and lyrical. The artist got rid of internal dilemmas, which made the painting, more reduced, like a pure truth.

The inspiration of one artist is great, comprehensive, and often hidden. Suzana’s spirit of creation in this cycle enriches and permeates several points, first of all, her life emotional experience, then save the same through a painting act, but also the writing poetry at the same time. The universal symbolism of the myth of Persephone itself additionally encouraged the artist to unite her emotions and harmonize them with the archetypal features of toxic love, discontinuity, and re-consideration of relationships. She expressed each emotional phase of a relationship through poetry and painting individually. It was inevitable that poetry and painting would unite, because they are elementary connected by an endless commitment to love and emotions, which, even when they pass, remains silent forever.