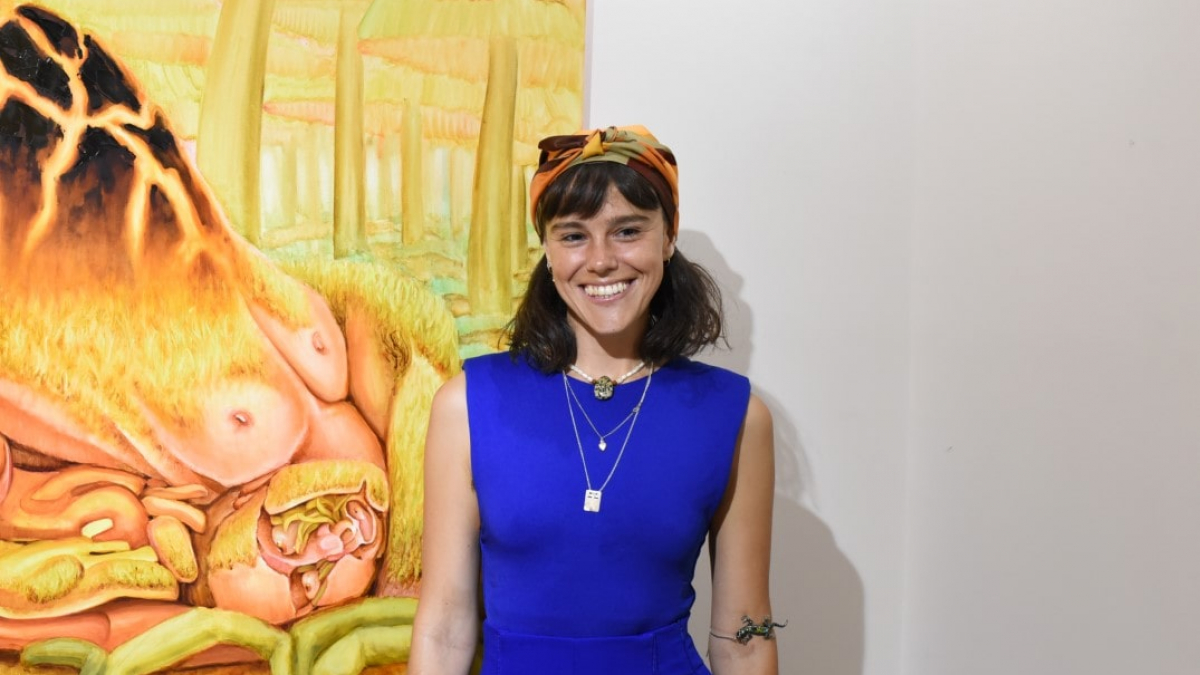 Floating across a boundless black ocean. Rainbow in the black sky. A whole new world vibrates in the color spectrum of a rainbow. We are all here together, overflowing into one another. Silence and void but in there, everything.

That is the space my paintings come from.

From these thoughts, words, emotions and experiences Suzana’s paintings come from. She excludes rational, purifying the space around and inside her, leading all thoughts into the abyss, to a pool of nothing and everything which will incarnate an arcadian world within reach, a world of possibilities. The world she allows to materialize in her works. From silence, void and darkness comes forth and with inconceivable speed, a vegetational abundance of shapes, colors, tastes and odors. Laying her trust in a whirlpool of life and cosmic energy of chaos, which creates order, an atmosphere of relaxation irresistible to experience. Through such “reality” and without immediate experience, she deems that we perceive and acknowledge scents (painting Familiar Scent), which we have never known before, because the moment of recollection allows us access to a collective source of cognition.

Suzana seeks her path in the innermost parts of herself, for all the paths in opposite directions lead far away from the center and leave a feeling of alienation. Reliving the familiar, known or modified preceded by the new, residual from the collective subconscious which kindles endlessly. She herself gets surprised by what we carry inside, how much of the fantastical, mythical, surreal which helps her painter’s expression become equally real and unreal, perplexing but desired.

Emotions and fears reside in the stomach. Subconscious lives in it. Our entire lives we feed this fear in our guts, shoving inside socially unacceptable traits and emotions. We feed them without intuition and in tune with nature. It grows and divides our being. When it acts, it leaves us without control. In such rift and conflict, a wound emerges. Process of healing begins in silence. In the act of spreading of roots. In illuminating the dark. In making peace. In liberation (thorn by thorn), until a rebirth in a whole (painting Blossoming Stone).

Suzana’s paintings can seemingly be interpreted as very personal, but all personal experiences are just a part of universal and primordial in ourselves. Artist succeeds to conjure up an atmosphere with her display of passion, commitment, unification and love in the content’s entirety. Through magical worlds of peculiar beings, carries these strong emotions corresponding, in that fashion, with fantasy genre.

Primary associations emitted by these works are transformation, birth, living. These processes are not necessarily burdensome, painful, painstaking, they are unavoidable, acceptable, present and the secret of their beauty is in their lack of denial. Abundant world of pastel colors and tones would assuredly humor the queen Marie Antoinette more than the famous cakes in the castle, palettes of color so receptive they could be swallowed, consumed or at least lured by into a sweet sin. In the trail of Hieronymus Bosch, with expert toning, Suzana assures us we can and we could enjoy life without delay, honest and committed. Together, love, eroticism and perversity are parts of lifeblood, so they should not be scandalized or marginalized. Inspiration of artistic and vital creation seeks for a driving force of life, and not the spilling of the blood of sacrifice.

If there are moments when life becomes a barren desert, Suzana’s works could be an oasis where we could disappear, a fata morgana which we would believe we could achieve and accomplish for ourselves. Visual world of fairytales and otherworldly landscapes justifies the idea of non-material, an absolute beauty of nature which in her shadow, keeps all of earthly, artificial riches. Such world makes mankind not want anything over and outside nature, for in it we are joyous, sufficient, content and carefree.