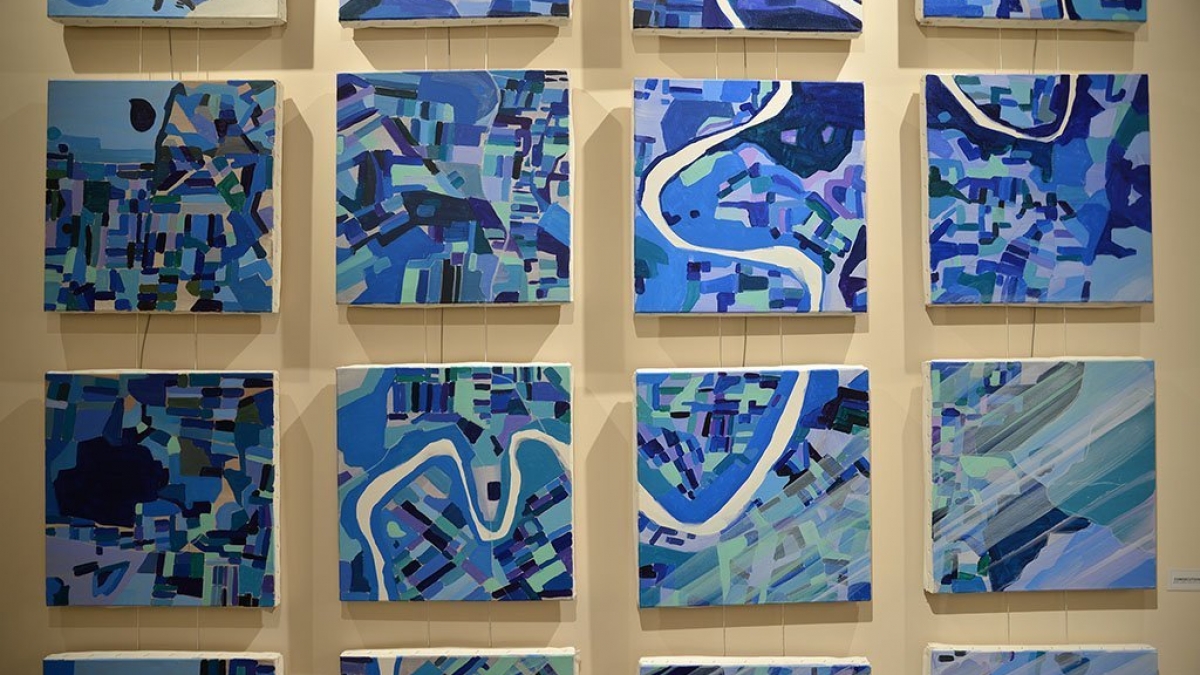 Does the title of the exhibition transport us to the essence and lead to the resolution of the complex equation of one of the essential questions of the minds inclined to think? The “Catch the moment” sentence is an instant navigation of our consciousness that focuses on the moment and objectifies it completely. The name may refer directly to a permanent thread of narratives, but the paintings systematically and studiously investigate individual elements in which we can try to solve the equation that many mathematicians, physicists, philosophers and thinkers analyzed in their extensive work. Correlation of space and time, their synchronized conditionality is under the constant inquiry of our curiosity.

Stefan’s interpretation of the space illustrated by the network, the scheme is for the interpretation of the same, suggests a more comprehensive view, a broader cadre, thus achieving eloquent perceptions, more comfortable moving the observer through the image itself. It freely allocates central and peripheral zones, which assigns their priority in the order of analysis. It is worthy to talk about using large formats to justify the undeniable infinity of space and time, while formal elements emphasize the importance of the moment and a certain place. The conquest of both mathematical and philosophical categories is impossible without the operational interference of dynamics. The variability of people, their internal and external processes, suppressed or realized, conditions changes the environment and the form of reality.

“I’m doing what I see. The problem is only in sight. If you can imagine a thing, project it in space – then you can do it. And you are a real realist. The universe is real, but you can not see it. You have to imagine it. When you think of it, you can be a realist, simply by his stimulation. “(Alexander Calder, From the Collection of Conversations” The Voice of the Artist “, 1960)

The images suggest the sensitivity of the space itself, so we can possibly talk about the psychology of space, which directly shapes cour behaviors, actions, and then we make changes of frames that locate and determine us. Some spaces would be highlighted as meditative, some as sharp, some confusing, and some stimulating, or it is just our autogenic perception, debatable and not the only one. Despite their durability, they are at the same time subject to instant changes, thus relativizing the concepts of permanence and variability.

“If we are lost in the observation of the infinite spatial-temporal size of the world, thinking of the past and future centuries; or, if the sky is truly revealing to us innumerable worlds at night, and if, in this way, the incompatibility of the world influences our consciousness we feel null and voic, we feel as individuals, as revived bodies, as transient phenomena of will, as the drops of water in the ocean, and breaking into nothingness. But, at the same time, against such an avenue of our own nullity, against such a deceptive impossibility, the direct consciousness reveals that all of these worlds exist only in our performance, and only as modifications of the eternal subject of pure knowledge; and as soon as we forget our individuality, we consider ourselves to be such an entity; he is necessary, conditioning the bearer of all the worlds and times. The size of the world that has disturbed us in the past is now resting in us: our dependence on it is abolished by its dependence on us. “(Arthur Schopenhauer, the World as Will and Representation)