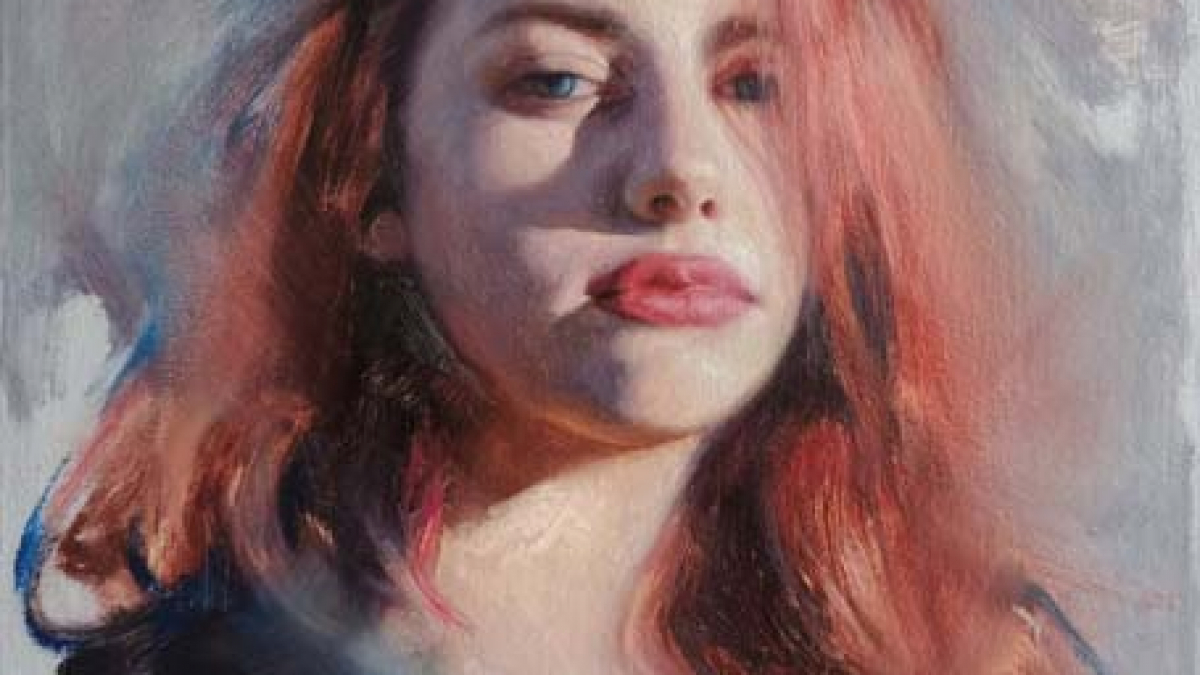 Painter Slobodan Radosavljević (Kragujevac, 1986) graduated from Arts High School and then continued to school himself. That part of this artist’s biography is the key to understanding his opus. He is educating himself the right, old-fashioned and nowadays forsaken way, by learning from the old masters whom he studies by visiting European museums. That process is open-ended and can last a lifetime, unlike the academic education. This young artist couldn’t learn anything about the style or the painting technique of the old masters in any of the European arts academies. Moreover, with such interests, he would be received with animosity and his work would be considered backwards. The method of learning in great museums has been used by some of our great painters such as professor and academician Milo Milunović and academician Ljuba Popović. During his 4-year stay in Paris, Milunović never enrolled in any state or private school, but instead studied in Louvre by copying the works of old masters. Ljuba Popović upgraded his Belgrade education in Paris, by constantly going to Louvre and other museums for about 50 years, carefully studying museum paintings and sometimes interpreting them to his friends. That abandoned approach, which was originally traditional, is the interest of Slobodan Radosavljević, because it is artistically the most difficult and implies a high level of reflection and deliberation.

This young author has an additional hurdle because he is an already formed painter with his own poetics, who uses the deliberations just to solidify his system. He wants to try out on the toughest terrain, in the easel figurative oil painting, and to enter the space already occupied by extraordinary geniuses before him. It is not only a sign of great bravery, but also the essence of his visual world, the aspiration to re-establish the painting by all of its classical laws. Radosavljević makes a great leap of returning back to the painting, in spite of the prevailing current of the time. Instead of varios aspects of new apstractions, new artistic praxes, photography, video, performances, installations, assemblages, digital and virtual reality, the young master has turned to Jacques-Louis David, Jean-Dominique Ingres, William-Adolphe Bouguereau, Vlaho Bukovac and the other greats of neoclassicism, symbolism and academic realism. Is it an anachronism, does this painter survive on the margins, outside of the contemporary currents? If we think that way, we are losing one historical dimension of (post)modern art out of sight, in which have the governing guidelines, more than once, turned in favor of figuration, especially the ones precisely painted, modeled after the ideas from the past.

To understand the endeavor and range of this artist we need to have a broader picture of the contemporary Serbian and world scenes. Radosavljević is, above all, a realist, and realism is one of the two main style formations of Serbian painting. It has lasted since the Biedermeier period, neoclassicism and academic realism of the 19th century, right until after the postmodernism of the 21st century. It branches out in more directions in Serbia: urban, magical, poetic and heritage realism, as well as hyperrealism. Slobodan Radosavljević belongs to the least represented form of realism, the academic type, based on the greats of the 19th century. It is a classy form of the art that binds together many elements of the other directions of realism. This young artist’s work is, however, pronouncedly supplemented by symbolism, more accurately he also represents neo-symbolism, stepping into the second great area of Serbian painting, the irrational and fantastic. On the other hand, we don’t need to look for justification for this kind of art in the traditional sphere, but in the most avant-garde, in the ideas of the leading thinkers of the contemporary world art scene. Arthur Danto, one of the leading American theoreticians, said that the defining line of this new period is the “lack of direction”. “Lately, the people have started feeling that the last 25 years were a period of unbelievable experimental productivity in visual arts without a single narrative direction (…). All that has ever been done can be done today and be an example of post-historical art. That also means that, in sensu stricto, there are no more distinct periods nor specific styles.” – claims Danto. For Dragoš Kalajić, modernism was already that kind of period, and not postmodernism and contemporary post-historical art.

In the end, let’s get back to the work of this artist itself. The artist is interested in what was banished from the contemporary art – classical beauty and sensory painting. He is introducing fine modeling, chiaroscuro, artistic treatment of the incarnate, hair, fabric, and materialization as a principle of the image within the old theme of the nude, the portrait, the scenery and the human figure in the scenery. In that regard, he is nurturing an atmosphere in the painting, twilight mood, tranquility, often resolving the painting in tense and dramatic contrasts. That’s why there’s Weltschmerz and Spleen, sorrow and joy, pain before the incomprehensible and the unspeakable in his work. He paints young, beautiful, noble people and ultimately speaking the tendency is only one – towards spirituality.