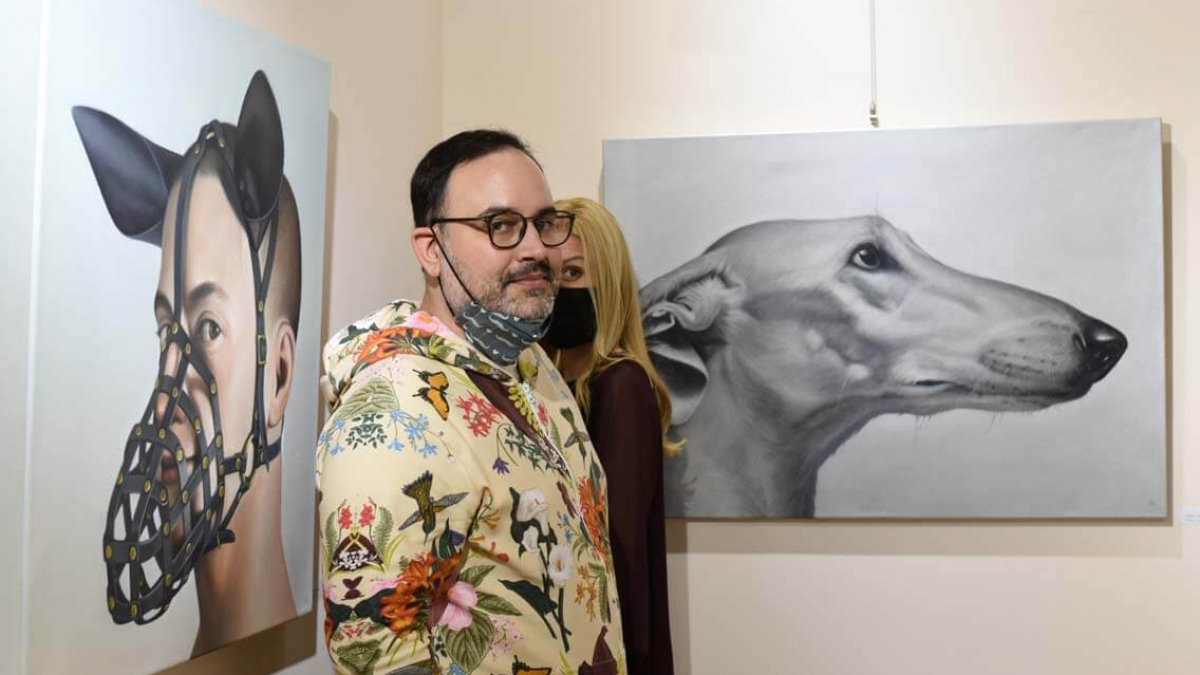 „Beauty is … when the eye in this world rediscovers what the mind already knows. “

These wonderful creatures, these “wonderful paintings” shrouded in harmony, impeccable precision, magnificent meticulousness, superior expression, empirically precise compositions, artfully brilliant, have been brought to perfection. The artist avoided grandiose formats, as well as the banalization of veracity, he absorbed an enormous amount of energy to the paintings. The paintings do not expect anything, they enter the personal dimension of the observer, with the grace of “Ladies with Ermine” (Leonardo Da Vinci), they take your breath away, they stop you for a moment. The observer remains because he is intrigued, he stops, he absorbs a Renaissance humanism that permeates the soul and its space. The selected photographs become a perfect template, the selected characters are metaphors of aspirations and reasoning of the artist himself, who manages to convey his personal evaluation system with his portrait ability. Beautiful and pleasant paintings, academically ratified, formally express the idea of ​​the sublime beauty of morality, ethics, the basic acts of humanity. All this veristic impression of the painting and its hyperrealistic appearance do not work in the interest of its physical compactness and existence, but of sublime metaphysical cohesion. A stable minimalist approach, emptied spaces of decorative, descriptive, scenographic, store the thought that floats and is sought, and is found systematically, slowly, going back to the very beginning. The dominance of the figure with the space inside and outside the painting increases, a lot of self-centeredness, towards oneself, due to the lack of details. The painter transcends the anachronism of classical expression. Equally present are the Renaissance line of calm and muted modesty through the visual doctrine of the painting, and the Baroque contrast and charge of the inner energy of the painting. They coexist undisturbed in the painting, in which the eclecticism of the art directions is balanced.

Portraits of animals, large-framed, refer to human portraits, enriched with a modern tone of aristocratic (painting Casper, painting Hello kitty) are equated, incorporating the features of (courtly) portrait expression. Man’s anticipation of the established character traits of certain animals emphasizes the close and inseparable connection between humans and nature, which inevitably determines him. Man consciously or unconsciously chooses the negative traits of animals that he emits (wolf-predator, cat-cunning, raven-intelligent destruction, snake-hypocrisy), and the nature of the animal world does not necessarily show negative behaviors. A human being is prone to extremes, even when he takes care of animals and allows them to enter his personal space. Pets become status symbols, receiving all the benefits of a luxurious life, where the role of owner and subordinate is debatable, due to immoderate and distasteful indulgence (painting Casper, painting Hello Kitty, painting Midnight Lovers, painting  The  Moth love story). In some situations, there is great enthusiasm for the physical beauty of certain animals, so man gives himself the right to exploit them, for personal luxury and prestige, and justifies his dominance with greed, often beautifully packaged and stylized (painting All rabbits go to paradise).

“Rousseau has historically had a positive attitude towards people. Contemporaries did not share his philanthropy: “Man is evil and unhappy”, the rationalist Bell laconically claimed. Rousseau even thinks that man is good by nature, but society corrupts him. This is his main thesis, which he already states in Emil’s introductory words: “Everything is good when it comes out of the hands of the creator of all things, everything is perverted in human hands.” That is why it is necessary to look for the original and natural in one’s soul. Rousseau’s motto Return to nature! It refers as much to this original and good human nature as it does to a return to natural life, outside the urban civilization whose way of life corrupts. His moral compass is conscience because we are born with it. ”

(The search of the soul. A cultural history, Ole Martin Hoystad)

The double portrait (pictures of a child and an animal), expands Plato’s idea of ​​the essential conquest of beauty as a universal, unifying concept. One being, and two bodies, a child (formative, infantile) and an animal (instinctive, animal), two character traits with the intention to sublimate into one, uncorrupted, basic, uncontaminated, good. The kindness of the animal and the benevolence, the incorruptibility of the child, to which we can be sensitive and vulnerable, are often questionable, even without a responsible reaction, which would be undesirable and inappropriate (painting Nevermore, painting She-Wolf). The phrase that Children mature much earlier today can preserve both a well-intentioned and humane tone if that maturity would defend beauty and goodness as the prestigious categories of ethics that we advocate. It is possible to cultivate non-manipulative and basic reactions, the belief that the survival of a society or an individual is not based on calculated resourcefulness, but to inherit the idea of ​​goodness as beauty, as a totality. It is desirable to protect children and animals’ primary and undamaged qualities on which a human structure that does not degrade or endanger will be built.

These wonderful creatures on the canvases, often with a semi-profile, very persistent and direct gaze, provoke without transparent gestures, a very calm attitude, uninterested in helping to demystify their message. They patiently wait for a moment that is long, perhaps endless, in which the observer will distinguish the clarity of communication, in separating the good from the bad. The physical and material dynamics of the image is almost stopped, while the energy vibrato is intense. How to grasp the invisible, with so much deliberately unsaid on the faces of the portrayed? In front of carefully painted works, elaborated themes, with subjects from the contemporary context, how to reach and return to the native, primordial, nature, if that is the path that the artist points to, and it is impossible with a shortcut? So many doubts remain under the veil of mysticism, while we persistently re-examine what is the dominant category between the childish, the infantile, the speculative, the enlightened, the learned …