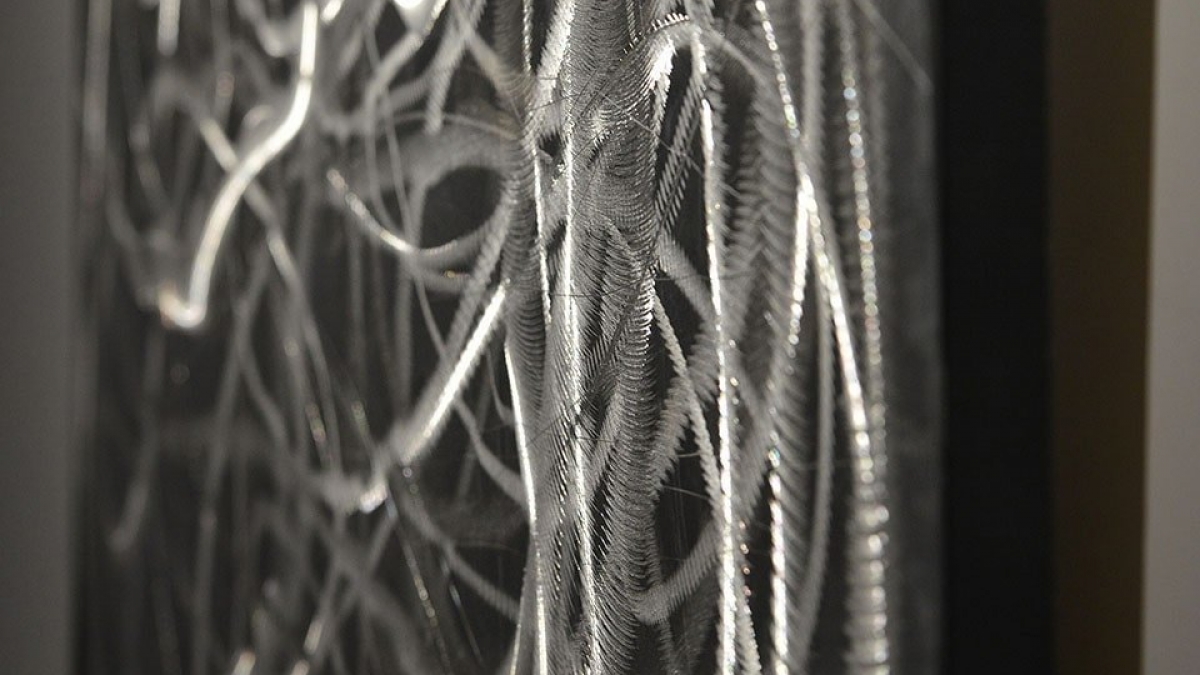 Creation in the circle, the title of the exhibition of Nikos Arvantidis, by which he implies his epicentral expansion of artistic sighs. Moving from the nucleus, where he unconsciously and automatically gave all his power, discontent and autonomy, he forms his ideas towards the edges of the canvas, a calming central trunk area of ​​action, he approaches the border areas, sinks into tears, or rises to sacral silence.

Nikos plays wisely with recklessly typed moves and shapes consciously projected, like squares, rectangles or circles, opposing consciously unconscious. His imagination seems to set limits at a given moment, which we do not suppose because the momentum of inspiration is precisely in those lines in its zenith. The lines subtle vibrate, with the subtle force they want to soften the ring that the artist has established, to switch to the other side, the side that is dominated by peace, order, static, seemingly. Somewhat they manage to delve into their virtuosity, and themselves become undefined fences, allowing us to prepare the slowly slipping into this other dimension. While in some works they remain in strict frameworks, a categorical attitude, the artist stays in his intention to separate both the nominally and ideally two surfaces, the two truths of one act, the two ways of thinking, the two faces of one view.

Nikos opposes the chaos of the dark, contradicting them with each other because they are in synchronized existence with their diversity. The artist rounded up one scroll that teaches us about the necessity of pursuing a perfect balance and non-inclusiveness.

Exhausted passions, allowed and released, are inserted into the centre, primary and dominant, turning into their echo, changing their states and ways of manifestation. But only as realized, they allow other feelings, thoughts and hints to happen to the artist. Apparently, the artist hides his passions and instincts, keeps them pressed, but they are not cluttered, bounded by circles, they revolve around their axis, live under the watchful eye of an artist, who dictates them to the pace of propagation.

You can not escape from infinity, fleeing into another infinity. You can not avoid the same by deception so you can find it differently. (Umberto Eco)

By definition, the circle has no beginning and no end. Creation in the circle has no beginning, no end; there is continuity and guaranteed infinity that gives a poetic tone and a sparkling charm to the whole picture presented by the artist to think. Although on a formal plan we have the impression of placing and closing specific sequences, it is nevertheless an essential fit in a wider image that strives for freedom and continuity in search, creation, and knowledge. This route is always individual, unpredictable, uncompromised for both the artist and the consumer, the viewer. The artist unselfishly shares his research with the audience, stimulating it to be activated. Consciously or unconsciously, asks or receives answers, questions asked or tacit feelings.

It often happens that certain coincidences are interpreted as fateful, and suddenly they have the appearance of extraordinary signs. Similar beginnings are also notable in the development of the spirit value. The two words imposed on him will mourn for him in the song, or the noise on the street will indicate the musician to build the entire symphony. But these calls are developed according to a precisely directed order, in which the act of composing will entail itself and compensate for all that the initial event has shaken the ears. Here, the mess and the distraction are caused by the events followed by returning to the order or balance through the relaxation of the induced energy, the workman of the work. (Paul Valeri)