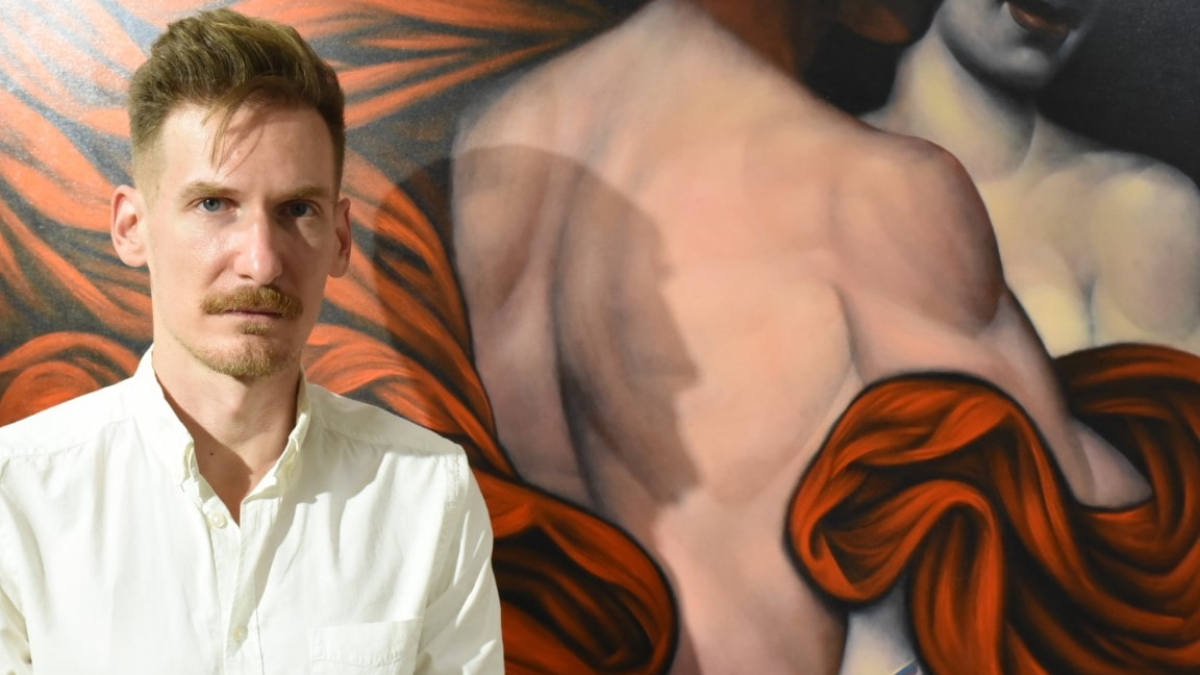 Marko Tubić, a young but already established artist, with rich exhibition activity behind him, chooses works for the Lucida gallery that correspond to the concept of the gallery, but also to the very spirit of material and immaterial space that characterizes the work of the gallery. Perhaps the first artist to be inspired by the idea of Lucida and accordingly designs a range of works to present himself, capturing the whirlwind of possibilities offered by Lucida in his thought and conceptual field of action. Through his artistic practice, Marko uses the tools of reality to evoke the unconscious, records a dream and tries to rationalize it, floating on the wings of imagination.

The heart is a metaphor for the creative effort, the artist’s inspiration and realization, the place where the poetic/artistic desire is born, and the place where the creative Self lives – that is, the poet/artist himself. This heart is the heart of the lyrical/painting subject, the core of the human and creative being. The heart is the place of creation of emotions, moods, and desires. The heart is itself a universal artist trying to understand itself. Knitting is what the heart creates and feels – a poem/painting. The entire process of creation occurs precisely in the space between the conscious and the unconscious, between reality and dream, and materializes here and in the physical.

In his overall work, Marko strives to reach the “holy trinity”, the unification and harmony of the material, mental and spiritual being. Matter as a part of the reason, conscious thought, as part of an artistic form and expression of the work itself, where are the harmony of composition, color and format. The soul is an emotional complex that radiates from the inner constellation, and these are self-experienced feelings. The spiritual is the third component, perhaps the primary one because the first two are at its service, where the artist tries to penetrate into that essential, alchemical, hidden. As the artist himself says, the ultimate goal is to cause enlightenment, delight and spirituality, both for himself and the viewer.

The material plan of the picture often implies reliance on historical models. Bernini’s sculpturalism and rapture is present in the structure and setting of the figures, but also in the creation of draperies that have both liveliness and mobility, strong contrasts between dominantly black, red tones and white, figuration immersed in a chiaroscuro play of light and shadow. A somewhat calmer composition like “Celeste” where we feel the presence of Klimt’s grace and gold on part of the background, although those tones are not really on the canvas itself. And yet subtle restlessness is present in Marko’s way, which lifts us up with those closed eyes and outlines of “red blood” on the face. A subtle parallel is possible between the painting “Secon Day” and “The Wanderer above the Sea of ​​Fog” (Caspar Friedrich David). Marko’s male figure is placed in a modern, urban environment, according to the present moment, the current circumstances, about which one imagines. Although the artist himself says that his subject is not engaged art, there are certainly points that a person reconsiders, which are inseparable from the environment and circumstances, the social context, which are characteristic of any period, both German romanticism and various earlier and later moments. Everything that the thinking being actualizes to itself and in itself, is sufficiently imbued with all the experiences and interactions experienced in the space around us. The subtle reference (possibly unconscious) to the quotations of the artistic heritage, certainly speaks first of all about the high erudition of the painter who creates in this time.

The novelty of this exhibition is the selection of exclusively large formats, although it is quite consistent with the production and expression in small format, in which he excels and brings his meticulousness to perfection, every time. Marko’s commitment to a small format is logical considering that he is looking for intimate, sensitive, private and personal, so he likes this kind of expression on that path of search. This kind of novelty only proves his skills and abilities to rule the larger space of whiteness in front of him in an equally good way.

Although it may be questionable explicitness he shows through figuration, Mark’s idea is not a provocation, physicality is only the artist’s choice of form with which he tries to penetrate the secrets of the essential in us, above all in himself. Any accentuation of the delicacy of the expression would be inappropriate and subject to a superficial and banal perception. By deconstructing and playing with form, he succeeds in constituting, consolidating, and stabilizing it (A view from the end, Cela, On the other side). Playful composing and decomposing, the principle of a broken mirror, which visually plays with our clarity of the image, pressures us to concentrate, focus to see and think. We have to think to see. If we see what we think, then Marko cannot even provoke us, because we see what is inside us, our lucid dream, Marko painted exclusively his own. And Lucid dream is somewhere in between.