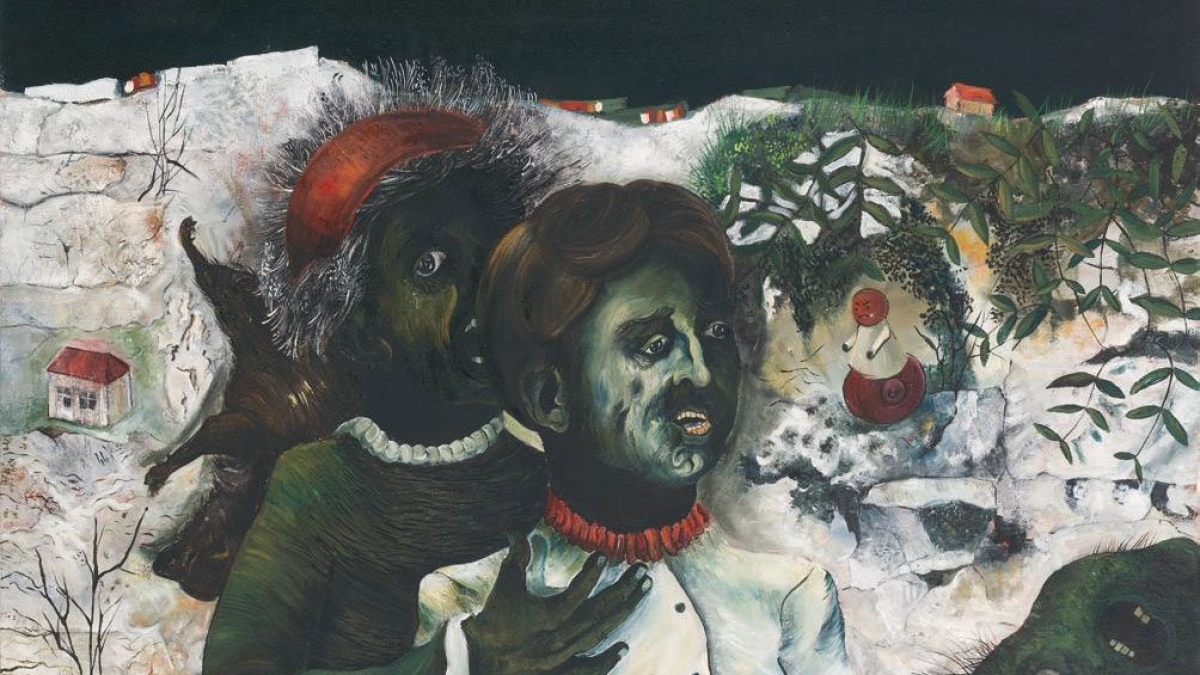 The step Kristina is making in relation to her work so far is to change the ideological and thematic focus, which now focuses on profane themes, she approaches the problems and the rethinking of existential philosophies. Although in the foreground the narrative structure still quotes the Bible and mythology, through individual scenes, it still leaves a possibility for different, opposite or at least atypical, readings of iconography. If we distance ourselves from the symbolic and metaphorical scenes we observe, we give a new dare or forgiveness to the stage actors, following their movement through the earthly Ad, all their problems and downs, in this reality here. Intertextuality is dominant in the titles of the works, although taken from completely different literary templates, they coexist and refer to a kind of prologue, an entry into the painting.

The figuration in the scene, the silent dialogues of two figures, sometimes three, form a figural and verbal triangle, the multitude of voices echoes or mutes, it is not strictly defined whether we have a dramatic plot or the tranquility of the holy trinity. Formally, there is another image plan, which we should interpret, equally enigmatic and atmospherically explicit. The expressiveness and gesture of the characters speak what is said, done or demonstrated by the deepest notorious motives in the abysses of the soul. The author’s interpretation of existential scars, spiritual vanity, hopelessness predict a dose of apocalyptic. Scenography, expressiveness of characters, performs drama in multiple acts, synchronizing different epochs, contents, implies the presence of an audience that moves beyond mere observation. Both Kristina’s art gesture are loud, as is the momentum of the narrative, while the characters seem to communicate the quietest, most unpleasant utterances of the soul.

I would also like to draw a man outside him, to draw his space.”

The landscape is a separate and independent category for the analysis itself, it opens up a range of interpretations, a new line of reading works, plans are supplemented, deepened and thus expand the corpus of meaningful and substantive. Can we talk about landscape sociology? The diversity of the landscape’s texture implies a diversity of character, though, layering of the soul through the layering of the landscape. The abstract treatment of the ambient, which, although grounded in mimetics, is not imitative, tends to be an authoritative and inventive explanation of various realities, gravitating beyond established systems of concluding. We must not neglect the interactive connection of man and his space, mutual sensibility, as well as mutual sensitivity.

The didactic intention of fostering humility in man is through drawing Babylon, an illustration of the biblical theme; here is an occasion to talk about overcoming ego, vanity, insolence in everyday life situations, in order to raise awareness and attain spiritual values, and to give up from strictly material goals and intentions.

Goethe’s anthological thinking – the parallel between man and nature – is expressed here in pantheism, which contains an anagogical conception of the world: there are different levels of being – nature encompasses all of them – and the soul can, accordingly, ascend to the spiritual realms. This is where the Platonic  inspiration is evident, both in terms of spiritual nature and ability of the soul to fulfill it, as well as its ability to fill itself with the spirit by ascending. But in that rich game, where man and his soul are part of a larger system that lives a separate, complex and incomprehensible life, there is also something random in a person’s destiny, similar to an unpredictable wind. ”

(The search of the soulL. A cultural history,Ole Martin Hoystad)

The vibrancy of colors and tonalities is not in favor of the Arcadian landscape, but a dystopia and sagacity in which the individual is often unable to change their place and climate, quite apathetic and without the desire to leave the pool of futility. The symbolism of temporal motifs (houses, chairs) examines the phenomenon of loneliness, as well as the work of Story about disappearing I and II. Due to painful departures, after difficult departures, who or what is what remains? Toys evoke childhood and all that is childish and innocent, already lost and always current and desirable. Images of animals carry the universal symbolism of the bestial and the wild in man, ignoring the individual typology of meaning.