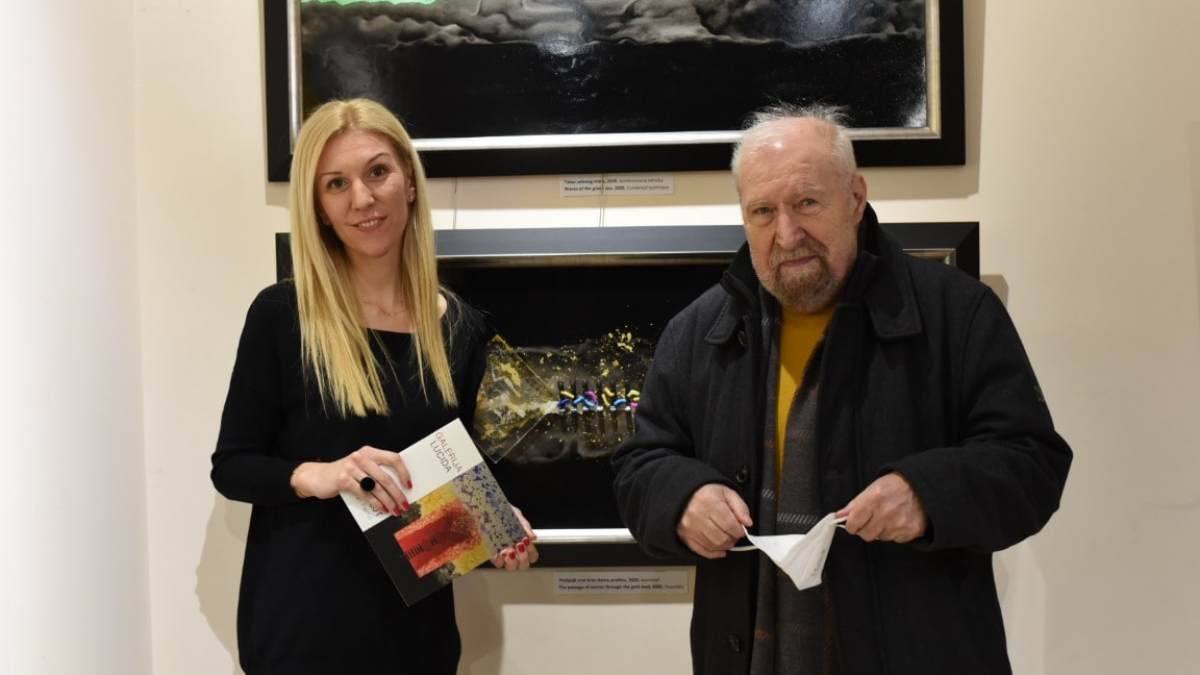 Leonid Šejka dreamed of an integral painting, in the same way the painter and illustrator Jovan Pantić (Valjevo, 1950) is looking for ways to an absolute painting, one complete in experience and colour, which would reconcile old and new performances. Therefore, he uses white and black as non-colours, like gold, which is separated from the spectra, examining the values of black as an absolute. Using contrasts of colours and shapes, as well as the ability to view individual images vertically and horizontally. Often emphasizing verticalism, a pillar-like image that is stretching to infinity, beyond the confines of a given format. Some pillar may be a glance into the abyss.

One colour often predominated in the central plane of the painting, and around and outside are the background events of extreme colouristic and formal disunity. Pillars, strips of paint and shapes have a sparking sensation which expand the central figure towards the edge, into depth and often in all directions. In attempt to describe the painting, the artist alludes at his iconography for individual paintings, showing very complex symbolism and tells stories that remain in the sphere of mysticism, and are left for the observer to decipher. The main intention of the painter can be better understood as viewed as a attempt to create between abstraction and figuration, ie. outside of them (as absolutes), brining traces of this drawing skills in the form of details. The lateral view of the painting, which expands indefinitely, cooperates with the central plane, this observation can also be understood as an expression of refined abstraction, or as a unity of full forms that the eyes inscribe as complex structures. The forms in question are liquids, landscapes, and clouds colourfully frozen in motion. Some coats of these colours are so subtle that it is not clear how they were applied, the look as if they were printed, although they were done with a brush ever so gently. This is a great skill that wakens a memory of Leondardo who said it should be painted in the way of the smoke. Other details are subjected to another unspoken rule – turning, the whole shapes become elliptical ones and embossed, baked like enamel and shiny, while the fluid, lavish forms are lean and matte.

For the author, the painting is a kind of a curious journey, entering a territory where other painters do now live, but also showing a distinct skill of working with varnishes, combinations of artificial and natural binders and oil paints which can only be produced from a highly knowledgeable restorer. The paintings are not uniform but there are predominant colours (black, lilac, green, ocher and red) and/or shapes (red tower). They also include interventions in the form of plastic applications that capture a small, visually rich, and colourful garbage dump of details or have metal jagged parts that the artist calls ‘’little crocodiles’’, and which brings the painting into the third dimension. These inflicted objects in the centre of the painting acts as a dragon with a head and tail, which floats through the cosmos. Therefore, Pantić reluctantly accepts that we value his achievements as abstractions. Their mysterious space also opens to the starry sky, totems and temples, sacral aesthetics emphasized in assemblages that expand and deepen the meaning of his spatial and multidimensional visions. Now, however, it is increasingly being pointed out that it is possible to conquer and direct the work towards pure art, without spatial extensions, towards an absolute painting.