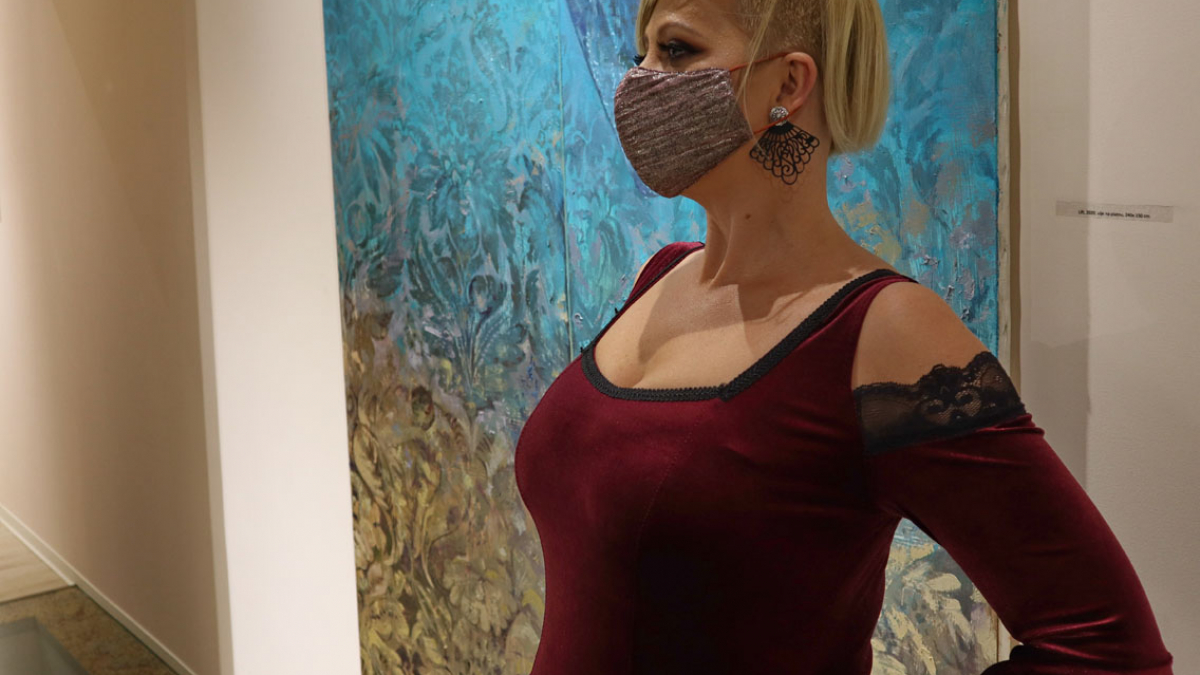 Precise and clear artistic handwriting, drawing accuracy, clever toning of plans, optimal color vocabulary that justifies its intention with each tone and signals a certain tonal and sensitive association, based on classical patterns, is only a stage base for further construction of the painting form and the upcoming art formulations. The artist does not hesitate to frame the entire scenes as well as the figures themselves unexpectedly and atypically, goes into further thinking, popularizes unsteady and undiscovered angles for perceiving mobility and dynamics in the setting of the act. She dares to play and recompose the prescribed norms in the construction of available elements. Ivana playfully arranges and fits the plans, presents closed spaces, which she opens to the observer, letting him choose between the implicit magnificent and luxurious interior and the underwater world, reflexively tempting, the one that guarantees relaxing effects. Static architectural quotations of universally recognizable rooms, of the salon type, receive in their personal possession water masses and surfaces, mostly of a restless character, conquering with their synthesis a hint of the third, transcendental in the spatial sense. The introduction into the corpus of the third dimension constitutes a surreal atmosphere and the otherworldly, oneiric. Such an arranged ambience, with watercolor-light, transparent, azure layers, draws boldly framed figures of a woman, which levitate, immerse, plunge and undermine the enchanted, mesmerized and intoxicated states of the painting. Bernini’s idea of ​​the moment of liberation, of primordial inspiration, in the sculpture Ecstazy of Saint Teresa, unaware of the comparative, through the lightness and devotion of the figure, the constant permeation of religiosity and art, reaches her absolute point of spirituality. Choosing a certain type of indoor pools with water, and not depictions of a river or the sea and that kind of unfathomable space, intensifies the tension of the atmosphere, in a very hermetic space of the picture the story of conquering freedom is built, which makes the challenge bigger.

Art is both aesthetic and intellectual, thoughtful and pretty, strong and well-argued. Easy transition from world to world, the combinatorics of various realities is the ballast of this time, it is our ability to be adaptive in different circumstances and play the card of resourcefulness. The quick readability of the works is firmly based on the narrative, it offers ambiguity without timidity and forced drama, the artist manages to calm the audience, but also challenges the optimistic reaction and universal act of freedom. Recent paintings are already well-established Ivana’s formulations, artistically and ideologically they are an extension of the arbitration of the notion of freedom, which is inherited in the female figure. The filigree drawing, the decorativeness of walls and floors, the materialization of draperies, the splendor of chasque halls, mosques or palaces, is sometimes faced with its own collapse, ruin and disregard for the historical, for the past, for its own. Is the swimmer stuck between the past, the present and the third, and what time best guarantees her freedom? Is it a pity for the past because those pleasant states and carefree feelings belong only to past epochs, and the devastated spaces make an analogy with the devastation of our present spirit, explained through the distortion of the figure? The limitations and insecurities of the space or opportunity in which we find ourselves certainly undermine the desire to break down boundaries, strive for liberation and return to the initial state without stress, favor the liberating needs and survival of the spirit of an era.

The exhibition “Breath of Freedom” corresponds with the current global situation, even in the most banal sense, the current standardization of rules and prohibitions, the privilege of free breathing, dominant confusion and distrust in the presented, determine the truth and the right to it. The replacement of concepts and their meanings, the manipulation and transposition of the physical into the social distance, supports the constant diversion of attention to alienation and exclusion from society, as a current problem, its vulnerability.

One figure of a woman, dressed, in an environment in which it is not natural, accepts the weight of her burden through her clothes, without physical stripping, without politicizing the feminism, she is the heroine of her story. Water is a metaphor for constant personal activism, both in life and art. Water is also a metaphor of different sensibilities and her weapon and shield in her own struggle. The enemy may be loneliness, but it is an illusion, because of its ambivalent character, it is difficult, but often necessary for self-knowledge, self-upgrading. In the present, there is often a latent or explicit subversion of the cult of loneliness-self-sufficiency, through self-help, strengthening self-confidence, positive thoughts and ultimate optimism, exclusive categories that make loneliness itself bearable or absurd.

Talent and skill, through a recognizable language of realistic depiction, continuously defend the oil on canvas technique and guarantee its survival in the era of technological ambience and the unpopularity of established painterly expression. The latent insertion of cult depictions of museum interiors into the field of painting, as a scenography for the narrative itself, promotes the institution of the museum and its necessity, identifying it with the religious concept of maintaining sacred toponyms, which is always unconditional, complete and dedicated. Yet universal religiosity, art, or philosophy  live and survive outside institutions.

The vitality of water and women in symbiosis, on many ways, explain the different characters of the female principle, her gender role, her religious or philosophical mysticism, her as an inexhaustible theme of artistic inspiration, her right not to delay the right to freedom through all appearances, and  the aesthetic dimension is always poetry that becomes an activist act of the individual.

“A woman is primarily a poetic reality, because a man projects in her everything that does not decide to be himself. The woman is the incarnation of the Dream, and for the man the dream is the most intimate and most distant presence, what he does not want, what he does not do, what he strives for and what he cannot achieve. The mysterious Other, which is incomprehensible immanence and distant transcendence, will lend it its qualities. So Aurelia visits Nerval in a dream and in a dream give him the whole world. ”