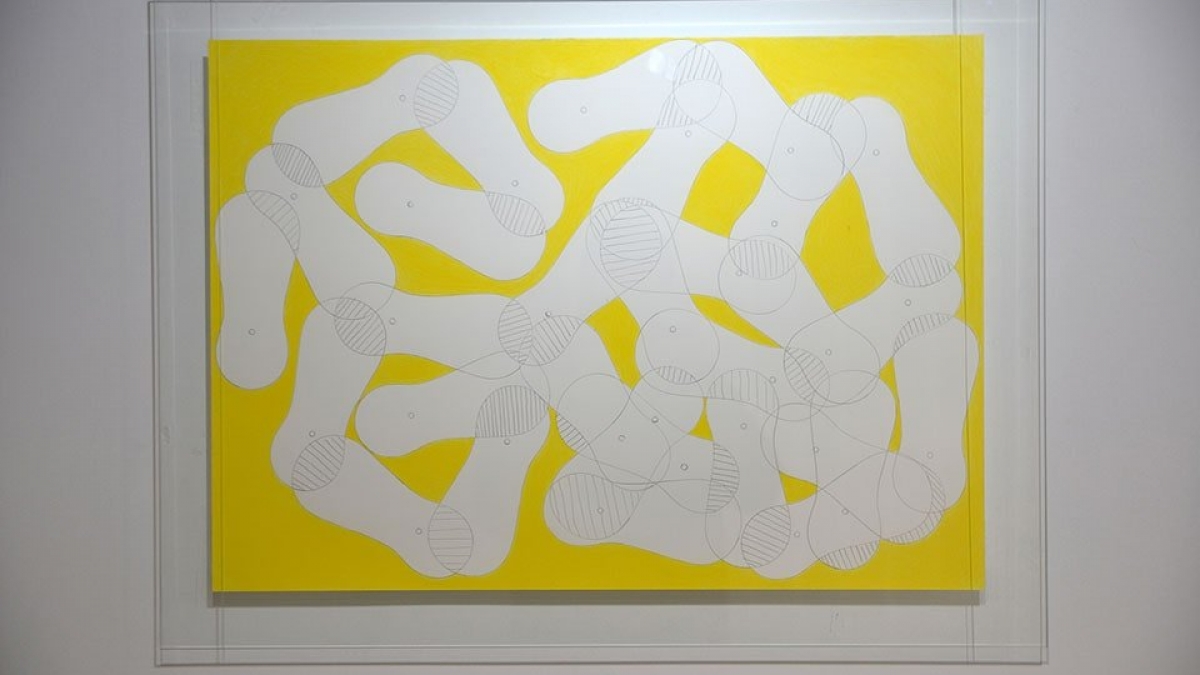 Isidora Fićović conducts complex research, annuls the assumed role of a privileged artist, starts a series of tests necessary to prove her constructs and from the perspective of a universal worker from the zero point, notices painful points informally different but essentially the same production chains.

“… it is the secret of happiness and virtue – to love what must be done. This is the purpose of the overall processing: to list people to love their inevitable social destiny. (Brave new world, Aldous  Huxley)

She carefully, diligently and deliberately produces her work with chain steps, multiplying the same action, and at points where physical exhaustion and technical perfection were identified, comes to the Achillian heel of the entire body of creation, and diagnosis allows her to enter the next stage. Isidora artistically tests the model and its application in the field of mass production and technology, it declaratively and plastically examines the internal laws of the template, multiplying the motifs, for everyone applying time, energy and personal improvisation. By introducing innovations, a more free and thoughtful movement, spatially unlimited, taken from calligraphy, which does not disturb the final product, but enriches it, it activates and promotes the psycho-physical possibilities of man. The author relativises the man-robot entity, translates it, and sublimates into being, satisfied rights, and fulfilled needs, which directly affects the optimal value of the done. He examines the necessary coefficient of freedom that needs to be implemented in the “Kafka Processes”, not only lists the problems of a modern man but offers diagrams that cure inflammatory processes, removes stress and disdain, destroys the fatal role of a personalised screw.

After identifying the problems and then proposing medicines for the recovery of the body from the painful repetitive actions, emphasising health as the only possible unit of measure, from physically switching to the mental, equally weakened under the pressure of the repressive mechanism of modern society. The subject is not equal to the executed action or the total sum of it, it seeks to free the soul, and only the spiritually unaccounted individual serves the overall prosperity of the society.

“I have the impression that the amount of boredom if it can be measured so far, is much higher today than before. Because previous jobs were in any case largely unimaginable without the passion of passion: peasants were in love with their land, grandfather was a wizard in making nice tables; the shoemaker knew the feet of all the villagers at random; I even believe that at that time soldiers were killed with passion. There was no question about the meaning of life. People carried him with him in the workplace or working in the fields as something most natural in the world. Every job has created its mentality, its way of life. The doctor thought differently from the peasant; the soldier behaved differently from the teacher. Today we are all alike, unites us our general indifference to work. This indifference has become a passion. One big, collective passion of our time. “(Identity, Milan Kundera)

From the phenomenological side of Isidora, the effect of massiveness and the “copy-paste effect” is analysed in the phenomenological aspect, the expression of every man, where he cultivates “every-one” and conceals, annulates the person, the uniqueness of one. Aware of the complexity of the preservation of personal identity, the story “The emergence” of the Japanese writer of the 20th century, Kan Kikuchi, is annexed to the massive production of the physical and emotional, so that the relevant mutual interaction of the external and the internal is not abstracted, thereby loudly advocating the humanization of technical. Every performance and action of a person can have a status of skill, not a given action and an indoctrinated visual if asked, how to choose a variety of clothes about the situation, and when we adhere to the “emperor’s new suit”?

Unquestionable traces of Kafka and Huxley’s thoughts and devastating forecasts, mapping European social problems, as well as calling the author on eastern models of placement and learning, where she very clearly points to the universality in the time and space of this node that does not allow the entire society to prosper already stagnates in his reversion of being in man.

Interlace. Dragon, Heaven and Earth. The author shares and integrates the whole reality with these elements break down and permeates. Reality is not just around us, but in each, the sky is not too high if we touch it. Are we on the ground if we rise above our abilities? How much do we need a lucky broker? The ideal relationship and position of these essential elements are left as an arbitrary decision.

…. The tortoise teaches us that the path to paradise through the earth, this path is long, almost immortal…