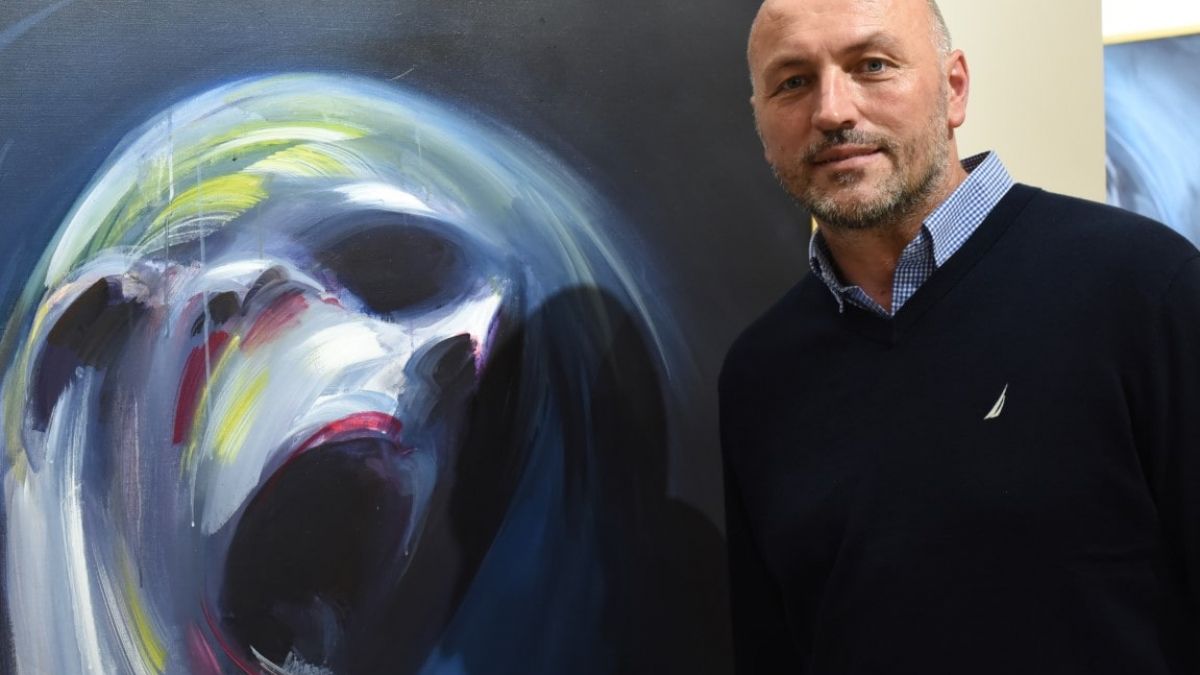 The cycle of paintings “Tooth of Dilapidation” created by Goran Ćetković (Kolašin, 1975) succeeds the previous “Voices of Silence” cycle. After being awake over the abyss of darkness and silence, from which he invoked images rather than words, the artist asked himself what happens with what remains after everything, is it threatened only by tooth of dilapidation? The emphasis here and now is more on the tooth, on dread, horror and gnosis, because Ćetković, in his own, artistic manner, is a philosopher and a poet. He is one of the most talented representatives of the, relatively speaking, new Montenegrin fantastic painting, accepted and recognized in the country and abroad, a form of art which Montenegrins are unrivaled in. The spirit of the man of Dinara is too wide and too deep to settle in the realistic, daily, utilitarian or intimistic, it requests the epic, mythical, spiritually wide, irrational, visionary and ecstatic. Thus Ćetković’ painting is like a cry, a plea, a lament not only over this era, about which esoteric and Nobel prize winner William Butler Yeats sings: “Things fall apart; the centre cannot hold; Mere anarchy is loosed upon the world.”

Ćetković returns the observer to borderline states, the head is just a cause, as the most mystical part of the body (there is the mysticism of Christ’s head in theology and the Veil of Veronica and Image of Edessa in iconography). His heads are ultimately expressive, as artistic paroxysms, the painter goes beyond reality and even beyond (post)modern art, the gestures of his faces reach the universal and cosmic. He does not find his harmony in coherence and superficial beauty; he finds it in drama he is steeped in, drawing catharsis from it as metamorphosis and initiation. His paintings are complete and monolith-like, and the artist daringly introduces the esthetics of the ugly into them, because he knows that it is the other side of truth and component of life. His faith in pure visuality is solid and precious, perhaps even martial, because spiritual warriors exist; he would like to return painting to spiritual sources, he is in collusion with the screams of Edvard Munch.

In a world stumbling with absurdity, spiritually stiffening and dampening, Goran Ćetković is roaring like a lion in the desert, his artistic screams are piercing the quiet of the consumeristic, utilitarian world of planetary backwater and perhaps, as Bishop Nikolaj Velimirović said, crying out for God. We cannot, however, claim that this grandiloquent and convulsive painting (Andre Breton said: Painting will be convulsive, or it will not exist) is dedicated only to present man, such statements would needlessly limit and decrease it. Great painter of Mediala Milovan Vidak claimed that he will believe man has changed when he sees his belly button ten centimeters further up. It is sufficient to read Ancient Egyptian upsetting confessions, laments, jeremiads over the last time that struck the ancient writer, which is, as we see now, perhaps even worse and more tragic than the present. Ćetković is a painter of present, as well of entire human fate, otherwise his painting would be short-range. He does not address only the present being, endangered humaneness, but also the past, every single man, from the first to the last; that is how much strength exists in his paintings. However, everything is simply in harmony with what Nebojša Pajkić said: “Since Adam, everything is a fall.”