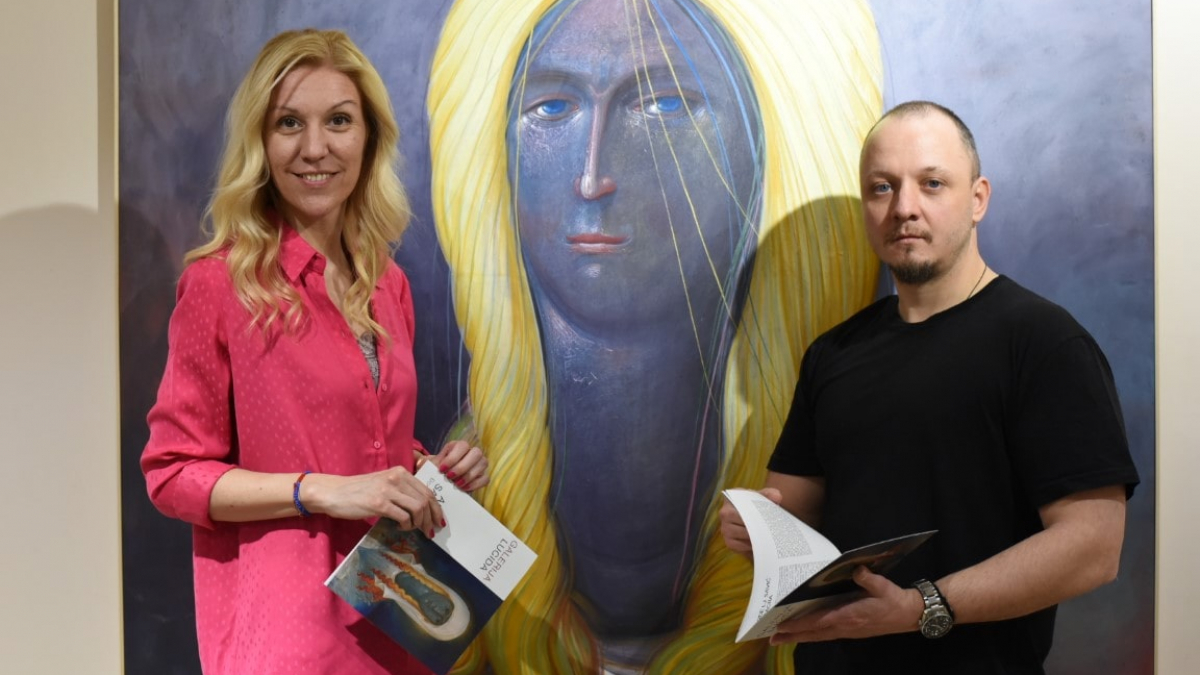 Painter Đorđe Lj. Savić has done something impossible, never seen in our art. He did not introduce Byzantine esthetics into abstraction, as Tomašević, Vozarević, Svetozar Sveta Samurović and later Zoran Grebenarović did, and which Milić of Mačva did to a certain degree in another way, by merging great late Gothic Flemings with icon painting. While painting church ensembles, a road opened to Savić, probably as another summon and confirmation of his talent, but both on irrational and Orthodox Christian foundations. Without betraying holy characters and ornaments, he succeeded in achieving the impossible – painting originally “Byzantine fantastic art”, as Biljana Jotić defines Mediala. He merged the unmergeable, miraculous and imagination, which prelates underestimate as spiritual deception with Christ-like characters. Isn’t, finally, the entire Christian history, from hagiographies, paintings and sculptures to Gothic architecture, fantastic in a certain way? Angels and demons seem surreal to ordinary man; however, they are only part of the second reality on the other side. That is how Savić’ painting appears compared to today’s alienated, rational, and cold techno-barbarian, digital post-avantgarde of electronics and robotics. In Orthodox language, he introduced the personal moment into contemporary fantastic art, the warm sun of the South in a moment that kind of painting is threatened by alienation and disappearing in hyperrealism, the illustrative and subculture. There are many homes in the house of God, thus this painter found his own way. His work has been immediately recognized by experts, and last year he won one of the purchase awards at the Biennale of Fantastic Art. This young lion of Serbian fantastic painting experienced a significant modification, change of mind, a road opened before him towards uncommon type painting, which he doubted for a long time, thinking that he was creating something wrong. Public recognition, however, convinced him in the opposite. He was also, as he said, “bit by the bug of Mediala”, but he resisted, and, almost alone in his generation, managed to stay out of the influence of Dado Đurić, Vladimir Veličković and Ljuba Popović. He discovered his own, personal road towards a painting with an unusual order and second vision, according to a different incarnate, painted slope (relief), colorful coloring and deformations, which introduce Eastern Orthodox painting into fantastic art, more on the level of atmosphere than an open formal solution. What he has achieved had never happened in the history of our art, he was the first and probably the last who merged church art and fantastic art. Since there is no one on the local scene who could be compared with him, let us turn to the world scene. There are similar achievements. A Russian living in Vienna, Haralampi Oroshakov, merged Eastern Christian iconography with avant-garde art, and there is a rare monograph about the activities of Russian painters who create the imagined based on icon paintings. One of them is Sergej Aparin, who lives here, however Russians most often achieve it under the influence of their brilliant school of symbolism. Greek painters Vasilis Katopodis and internationally famous Stelios Faitakis, who, although he paints icons looking up to the image of God, uses holy painting for postmodern, apocalyptic, and actual subjects. Savić is unique compared to those great artists as well, he does not resemble anyone, he found his own, unique road to painting. Only with him, at the time the great Serbian river of fine arts irrationalism seemingly began losing strength, we can see how alive, powerful and unpredictable our art is, how much it can be reborn and surprising, how salutary it is steeped into pure visuality, unlike western art, which is growingly sinking into the visual, illustrative, meaningless and demonized.