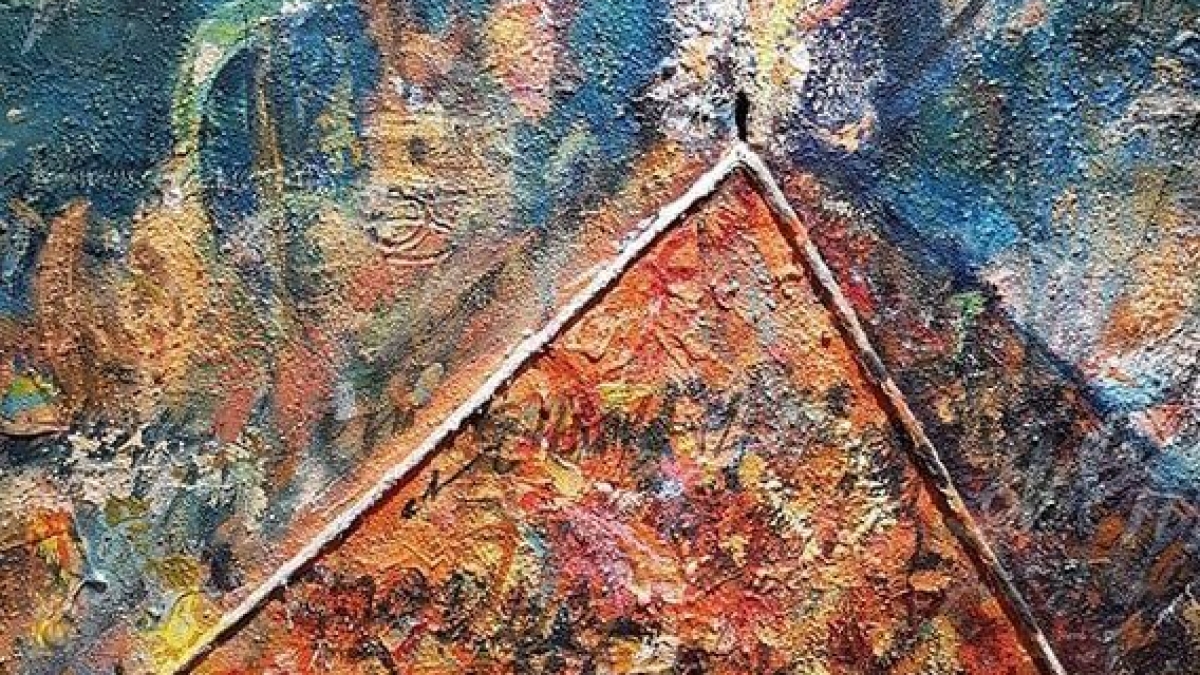 Charles Baudelaire wrote about the “forest of symbols” hiding in the world and world of art, similar to renaissance masters, who understood nature as an open book. Painter Danilo Vuksanović still perceives art as a secret, and that is the measure of his fascination with the wonder of painting. He finds the secret in the sacral, perceiving it as a world of correspondences and initiations.

His earlier works were marked by the esthetics of palimpsest, whereas he established a relation between words and painting in his later ones. Many have attempted to interpret the secret of language and painting in terms of comics, however it is deeper; it is a kind of philosophy, textology within pictology. The text is like a shadow of the painting, its dark reflection, extension towards a new meaning. A logical path for this artist is from text to line, color and painted frames, as integral parts of a painting; he attempts to connect the discursive with the visual, in order to make them more expressed in their mutual contrasting. Thus he paints “Codex” and “Guardian of Light” and creates the object “Beehive”, the “empire of signs” (Roland Barthes).

Expressing himself in cycles, he encompasses the manifestation of Gorgon Medusa, favorite subject of renaissance, mannerism and symbolism painters, rediscovering the mysteriousness of the world and art. From ancient myths and subjects, Vuksanović headed towards the biblical, towards “Genesis”, painting looking up to Hristifor Žefarović and Bodjan. Hermes, “Tabula Smaragdina”, First Day of Creation, Original Sin and Building of the Tower of Babel are all equally entering his vision. They are all subjects still remaining in the field of religion, philosophy and art, regardless of the extent science has been dealing with them. Hasn’t already Professor Radmila Mihajlović, the best Serbian expert in iconology, revealed connections between esotery and Serbian baroque in a series of studies in the previous century? The occult and the Christian have their depths and theologies, even perhaps some things in common, which artists such as Vuksanović are searching for. By painting “Disintegration of Dionysus”, the All-Seeing or Never-Sleeping Eye, present both in the masonic and Christian symbolism, exploring the baroque wall paintings as well as Demeter’s mysteries, Vuksanović moves from antiquity to (post)modern art, from fresco painting to abstract art, revealing how an art historian claims “30.000 years of modern art”. For him, an old wall ensemble is as valuable as Kazimir Malevich and Jackson Pollock, because he aspires to a kind of synthesis. Thus experiences of (neo)informalism and abstraction permeate the figural and textual in his works. In those value fields, he reads symbols characteristic for the entire, not only human creativity. He is a painter who creates traditionally, in the only possible way, if we understand the meaning of the word tradition literally = passing on the treasure from the treasury of antiquity in a new manner, in a new key and different way of reading, which already God-man was speaking about.