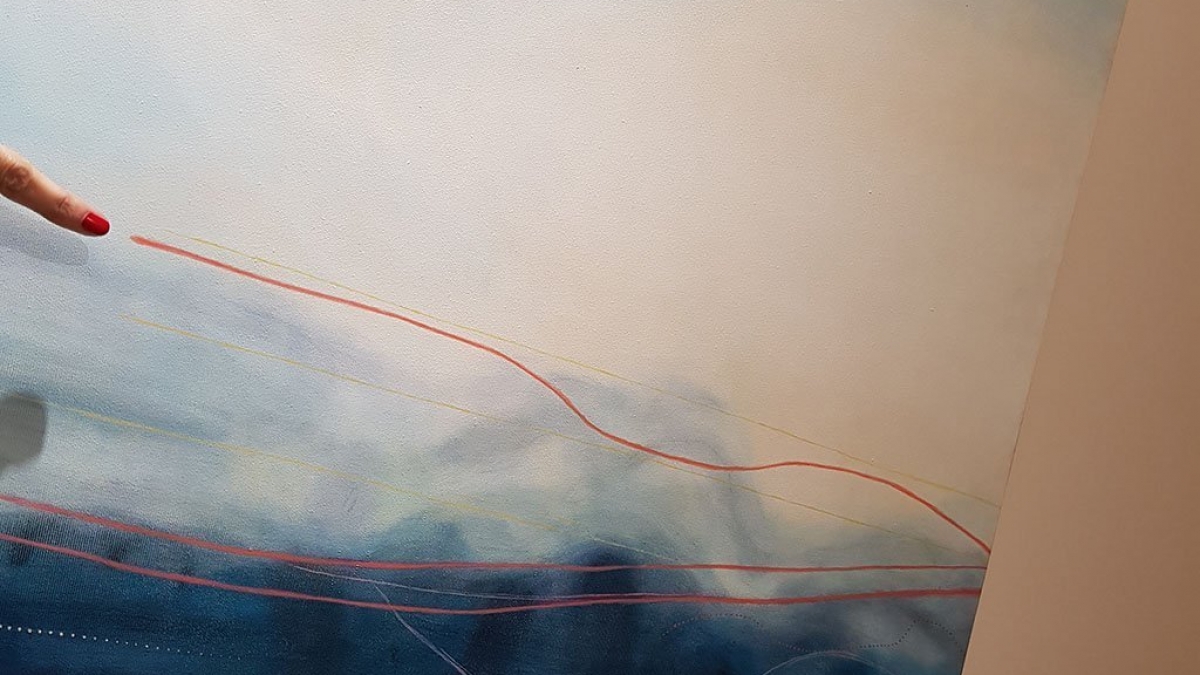 In the world whose history has dramatically accelerated and in which the personalities’ and events’ hyperinflation threatens to inaugurate a fabricated end of history, up till the moment on timeline in which history, due to the abundance of facts could no longer be told (Borges); even though events rush by us forcefully Ana Markovic’s paintings tell us to slow down and listen to our own pulse, somewhere far away on no man’s land, safe from noise and hustle of contemporaneity.

However, in a nervous rush to that island of silence the protagonists of this artist’s paintings lose every mark of temporality; their faces become amorphous masks „without forehead and a name“, and the outlines of their figures are no longer realistically clear; these watery, fuzzy contours merge with the background of the painting appearing to the beholder as if trembling, like under the water’s surface.

On the canvas Painting from a Journey the beam of light intersects the work in half as if it were measuring the distance between the Earth and the Sky, the World of Continuance and the World of Ideas, top and bottom of this landscape, suggesting that the speed of this Journey is unmeasurable and relentless and that the entire landscape obeys to this rush, thus becoming merely coordinate system in which the only thing given is speed.

Deep blue Grunewald like chamber sky on this painting represents the counterbalance to the lyrical swing of the movement of light and attempts to moderate it, stop it, and petrify the landscape. The darkness of the avenue in the painting Cyclist has the same function as the dark hues of cyclist’s clothes.

Cold, solemn colors are present on almost every canvas of this artist; with them the lyrical fervor and zest are suppressed, warning the spectator that movement is not eternal and that it has its Beginning and its End. Tender rose and white layers on painting Karlsplatz I make the work tremble in the eyes of the beholders even stronger than on other canvases, making the scenery of Karlsplatz distant in the spectator’s eyes, as if it were vibrating underneath the ice or iced window.

The light on Karlsplatz 1 is composed in a massive trenchant beam that cuts through the airyness and trembelness of this landscape, just as does the ray of light in Painting from a Journey. The speed on these canvases, therefore represented with light rays is precisely sketched making the ray of light a meta painting in comparison to the rest of the painting; the auto poetic image with which the artist herself, in a plastic way explains the movement of the landscape ripped through with the beam of light.

The landscapes in Ana Markovic’s canvases are therefore, unaccustommed by motion; the spectator does not see the countless, explosive movements, just as one does not see them in a digital photgraph of high resolution; these movements are being masked by the speed of motion and rush, making the eye unable to tell the difference between the two shifts, nor to distinct the contures of the protagonists of that movement.  After the Landschaftbild is placed inside the accelerator it seizes to be realistic landscape to those observing, becoming the reminisence of itself; replica on a celuloid tape on which every photon, every particle preserve in its traces the memory of the entirety, on what it once was in the postition of stilness. Before acceleration it appears as a mozaic, but after being irreversabily quicken it dispreses in numerous pieces of glass which melt back together in a single, amorph and ezotherically unclear image due to the constant locomotion.

Numerous micro movements therefore amalgam with great speed into one motion; the glass debris are recreating the mosaic. The landscapes in motion are in fact – one motion. In a way that Joyce returns to realism after Ulysses admitting to himself that, with the Finnegan’s Wake his lingual experiment, being brought to paroxysm came to an end. In a similar way, these Landscapes formed a solid and compact unity after their movement has been brought to paradox, no man’s land of a kind, island of silence on which we can, after a lenghty journey finnaly listen to our own self, rethink our own motion, slow the pace and callibrate the steps.