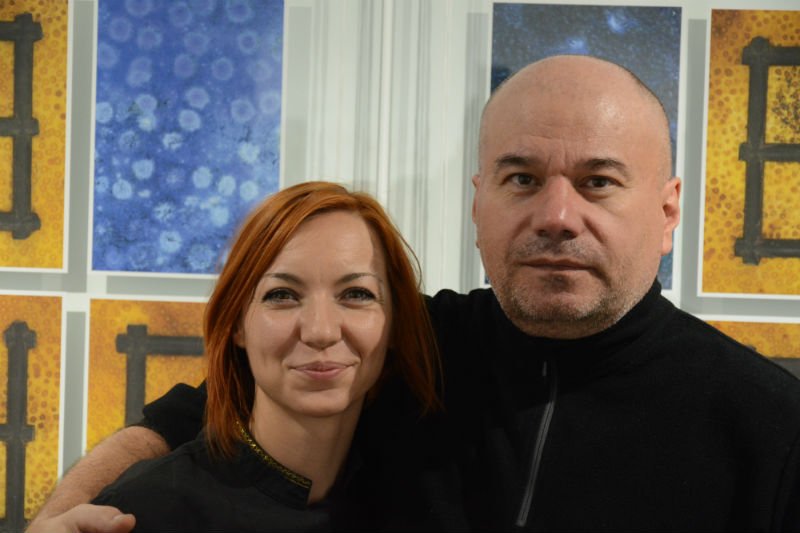 From the first beginnings in the late 1980’s, Vladimir Perić’s artwork has represented a form of an anarchistic course focusing on the rejected, as well as the efforts to create a ‘supralogical’ object.  Perić’s art is characterised by researching and collecting discarded objects/artefacts (which he discovers at jumbles sales, waste sites, etc.), as well as various biomaterials.

Perić explores the specificity of the object/artefact, its anomalies, correspondence with other objects, or organic matter. Through reprocessing of a discarded item, as well as biomaterials, Perić (re)constructs his own ideality – often combining discarded culture and (discarded) nature. Perić emits unusual messages that talk about the world about which we may have forgotten; he draws attention to this world by transforming it into something else, reprogramming it. Perić transfers to the audience his fascination with various specifics by focusing on the very existence/being/life of an object, its presence which is no longer someplace else, but here and now, by displacing the object.

With his artworks, Perić reveals the diversity within the same – through the accumulation of similar items, as well as biomaterials, i.e. through their combinatorics and correspondence. For Perić, each object is specific, as opposed to industrial endeavour for uniformity in which he seems to tend to discover a ‘manufacturing defect’ – a machine error through detection of differences in machine processed objects. Through its existence, the object creates its own history but also serves as an archaeological material for memory – an artefact. Some of Perić’s artworks attract the attention by the mere strangeness of the objects, others by their accumulation, combinatorics, recycling, reprogramming. One sign/signifier becomes the other.

Perić’s visual communication often operates on the thin line between design and fine arts. His famous “FeO2” represents a typographic interface that blures the traditional division of the applied and fine arts. This authoring typography brought him international recognition, and it has been listed in Steven Heller and Mirko Ilić’s publication Icons of Graphic Design (Steven Heller and Mirko Ilić, Icons of Graphic Design, Themes & Hudson, 2001, 2008).

The current exhibition presents Perić’s new photo-typographic artworks created in collaboration with art historian Milica Perić, with whom Perić has been exhibiting since 2013.

Interview with the Artists

Q: Current typographic works were created twenty years after the FeO2 cycle which brought you an international recognition. Is there a kind of continuity?

A: The material for current and former typographical projects is different, but there is a continuity of the process and the logic of creation. The interest in finding authentic forms that serve as a starting point for graphic – photographic design letters is still present. The destination of pursuits and the historical background that follows the creation of fonts is not identical, although both sources belong to the domain of rejected and abandoned objects and materials. For FeO2 font, the most valuable material source were waste sites and abandoned industrial buildings. The somewhat paradoxical situation is that in this war and the early postwar years, waste sites were continually supplied with waste material from active factories (Teleoptik, Insa, Impala, Ikarus, Kron), and nowadays – at least if we draw parallels with the aforementioned factories, production is partially or entirely extinguished, and once most frequently visited waste site no longer exists. The primary source for the current work is our living environment, as well as jumble sales in which we have been finding the damaged, defective or technologically outdated utilitarian objects illustrating the common culture and outlining the contours of a past time. Both then and now, all of these are “surplus materials” that are useless for functioning in the new circumstances.

Q: Unlike the FeO2 uniform font, different combinations can be seen in your recent works. What was the method of classifying material?

A: Classification and grouping into categories is an important feature in the entire previous as well as afterwards joint production (and not only in the context of typographic projects). Here we have classification in groups according to material (metal, plastic, cardboard and paper, glass, bio-materials …), then according to the context of found forms origin – which is evident in the title of this exhibition and, in the end – a classification according to the logic or pathway which has been used to achieve the final design for the letters’ graphic representation. These three realization ways are: documentary – when an authentic form is taken over in an integral form, without any intervention (mechanical, chemical) on the found material, then directed – when letters are constructed in various ways, and finally – the hybrid process, when intervening on the existing materials and shaping the letters within the given structures that offer a limited number of possibilities. The common nominator for all is the photo component, i.e. photographing of a found/obtained form of a letter, number or symbol and participation of this photo-typographic solution in all further font applications.

Q: Current typography was created in cooperation with Milica Perić. How did the creative process develop?

A: We do not have a single creation line; the creative process is polyphony. The starting point and work approach are not much different from previous principles from the time when the FeO2 font was created.  A joint quest for items takes place in the current project or letters form are recognised in our environment, but now there are more debates on how to reach solutions. Two minds bring different views, including several templates from which we choose the ultimate visual solution.

Q: Would you classify your typographic artworks as fine or applied arts, regarding the traditional division into use and supra use value?

A: As expected, this borderline is very blurred nowadays. In the world of typography, borders have been weakened, and new fields of experimenting have opened since the time of Futurists, Dadaists, Constructivists and the Fluxus movement, increasingly as we approach modern times. Strictly speaking, typography belongs to the field of applied arts and design, and letters in that way, especially FeO2 and PVC fonts which have a complete set of letters, numbers and punctuation marks, can be functional and applied but maintaining the peculiar visual component that is independent of use value. Homemade typography is only an inchoate project, therefore we are nowhere near completing the entire system of letters, numbers and characters within it. Currently, it functions more as a complex of art forms that can later be used as elements in the design. Each letter has its own width, shape, stylization, thickness, weight. Therefore the item itself ultimately determines the letters’ anatomy. We neither intervene nor place the letter (item) within some rules and frameworks that typographers should have in mind when creating usable epistle and font. We are more dedicated to finding and shaping of each letter individual character and visual poetics, rather than the creation of a functioning system, and we are not interested in reductionist parameters like equability, linearity, legibility. Again, these parameters are also flexible and in the field of applied art, depending on whether you create a typographic solution for a theatre performance poster or street signs. In the end, we still believe that the definition of what is art and what is art applied is very restrictive and we consider this forcibly pushing in one of these two drawers outdated.

Q: What manner of communication should the current artworks establish with the audience?

A: We work respecting our own internal creation generator, not calculating in advance how the public could perceive our work. Total commitment to the visual aspects of the work, the detection of various mechanisms of “correcting” and transposing elements from reality in the artistic context, occur continuously every day, especially when you consider that our living and creative space are fully united and intertwined. Perseverance, honesty and boldness in creativity are the components that we would like the audience to recognise as important, and whether they will be shaken in the perception of their own environment and the usual conventions or shift their viewpoint – that we cannot predict nor plan.