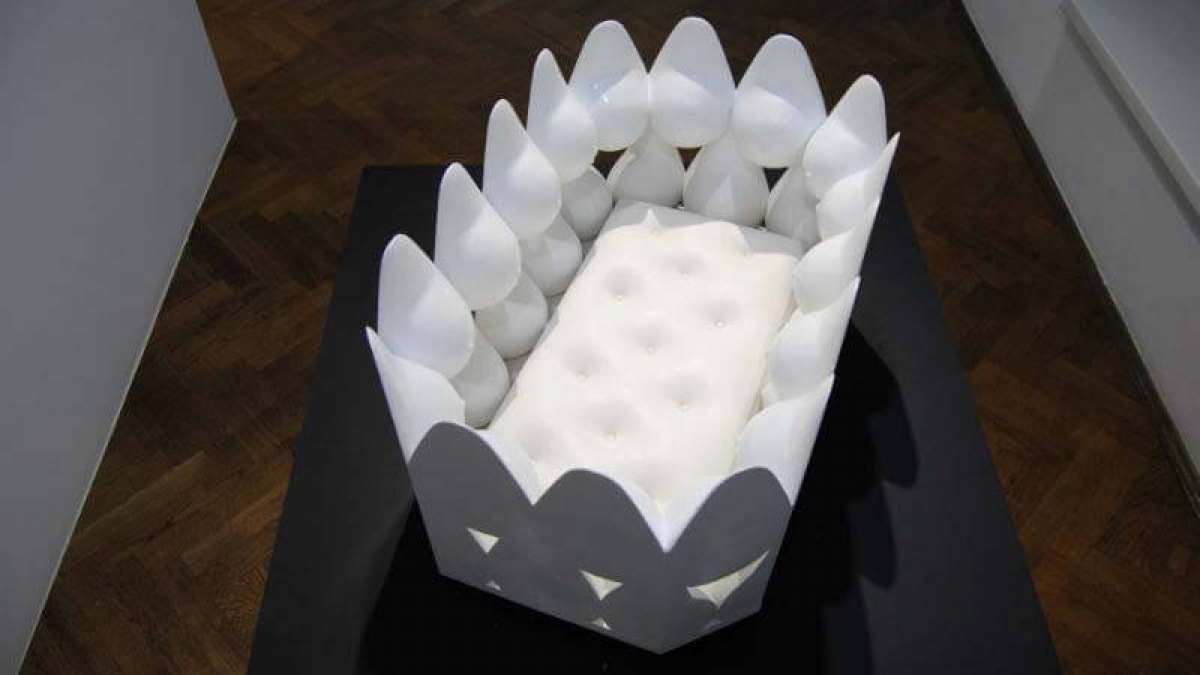 Nenad Burnić’s solo exhibition Loving everything and avoiding everything displays ten small sculptural forms with powerful messages, created in the past fifteen years.

Nenad Burnić objectivates his thoughts and insights regarding the paradoxical phenomena of the world that surrounds us, ironically transforming objects from everyday life which are rooted in pop culture and thus creates new relationships and unexpected turnovers regarding the reading of his artwork. Exposed to sometimes traumatic, other times comic dimensions of today’s world, the artist presents phenomena of everyday life in an ironic, sarcastic or cynical way. He forces us to adjust perception to another frequency, edge our understanding, and look at the present world from a different angle, perceiving paradoxes, stupidity and so-called “the truths” that surround us, in which we, as well, take part from time to time.

Formally, the repetition of patterns created with the module, which is different in each artwork, characterises Burnić’s sculptures. This module can be a plastic breast, a light bulb, a nail, an elephant, a pill, a mushroom hat, a cable jack… Sometimes, module presents a combination of two forms (syringe and doll or ladybird and four-leaf clover). The artist arranges these forms following the basic shape of the sculpture (White plague, Let us be grateful for worms and oblivion), and sometimes the repeated patterns represent the entire volume of the sculpture (When I think of your children … and Everything is connected). By linking (sometimes literally) the module’s original purpose and name (or innuendos about them) with the form and manner of artistically presented ideas through sculpture, the artist creates a small puzzle out of each sculpture, a riddle that needs to be solved. The influence of Surrealism is visible within the formal characteristics of Burnić’s aesthetics but, quite the opposite to the Surrealist insisting on the principles of the unconsciousness and subconsciousness, Burnić applies the thoughtful, intellectual approach to artwork creation.

After completing his work, the artist becomes a voyeur – he observes but does not directly participate anymore in the further life of his artwork. It is not the engaged, but only the critical approach which characterises Burnić’s artwork. If the art is a mirror of the dominant culture, his sculptures represent a parody of that culture. His sharp irony sometimes turns into sarcasm in the artwork but also in the title of artwork.

Burnić’s artworks are multilayered because he combines pop culture, burlesque and ready-made objects with thoughts of Freud (Freud), Wilhelm Reich (Wilhelm Reich) and the aesthetics of surrealism in his peculiar, emotionally distant manner. Burnić derides today’s world and some of its phenomena in sometimes funny, other times painful way.

In his study Critique of Cynical Reason, Peter Sloterdijk says: “Since philosophy can only hypocritically live out what it says, it takes cheek to say what is lived. In a culture in which hardened idealisms make lies into a form of living, the process of truth depends on whether people can be found who are aggressive and free (“shameless”) enough to speak the truth.”

The artist questions the stereotypes by opposing “precision of the initial reading” to the visual exposing of the reality.

In his review of the Critique of Natural Illusion in his abovementioned study, Peter Sloterdijk states:”On all sides, human consciousness is invited to deceive itself and to be content with mere illusion… If things were generally as they immediately seem, investigation and science would be superfluous. There would be nothing to look for, look through, or look into… But science and enlightenment have a detective-like relation to reality… Human individuals are never in the “centre of their beings,” but rather stand beside themselves …” We can almost feel the presence of the artist next to each of his sculptures exhibited here today, and we would probably not be mistaken if we thought he was cynically smiling.

Burnić holds that the essence of our lives is reflected in the fact that everyone should be excellent in his reality. He declares that he gives the best of himself by denoting the changes in society and spirituality through art and that he endlessly enjoys doing it.

Sure in its knowledge, the ideological criticism operates through disclosure of errors that need to be corrected. However, Burnić is sceptical concerning the so-called “truths”. He says that he does not want to reveal, show nor even suggest anything that can be categorised as “truth,” simply because the truth is something he does not know. It is just his way of understanding the truth and changing himself and his world through this understanding. And what shall we do, it’s entirely up to us.
Ivona Fregl