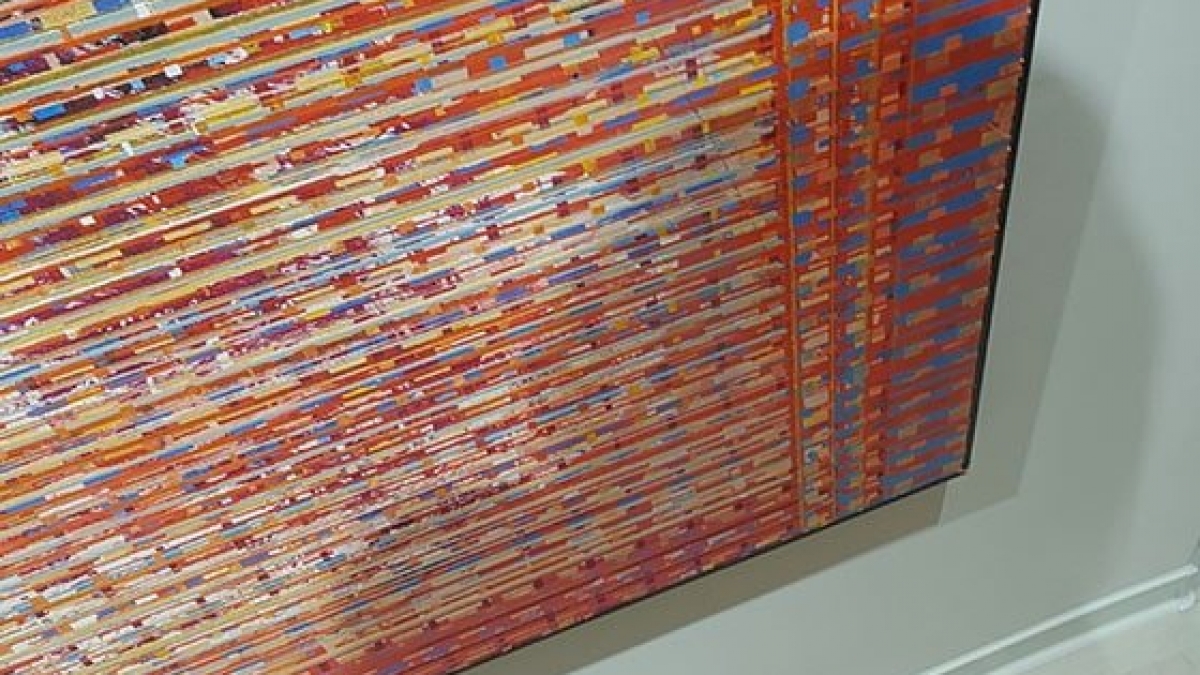 Although the name “Forest Pond Meadow” is suggestive and expected to refer to mimetic representations of landscapes, which we would normally classify as realistic, according to classification criteria, the works point to another direction of view. Ironic play with the name of the exhibition itself is about skillful marking, not a banal associative connection between nature and our movements, during which we notice, stop and record certain sequences. They are instructive for separate reflection, both of the terms naming the form itself and of the content that does not need to be referentially determined. Marko abstracted one trivial image of nature, although the title evokes that presence.

Instinctively selecting and then reproducing isolated motifs, their repetition that multiplies the model, gives them freedom of extension at the space and time. The format is the current choice that can be varied. The selected amorphous forms dissolve, forming an ephemeral-fluid system, while being compact and concise. There is a Mondrian­’s calmness, a quiet vibration of harmony, it moves towards Lubarda’s  trembling conquering energy in the plastic construction of the painting. Playing with seriousness, resisting a rigid  setting, in celebration of freedom and confronting dichotomous approaches, is present.

“His landscape seems to have become ‘canonical’ at this very time: conceptually rounded, plastic compact, symbolically condensed. With the feeling that the object, nature, carries a deeper truth that should be grasped, it becomes a kind of pattern that is filled with complex plastic material in the image.”

Floating forms could easily be transfered to another dimensional context and thought constellation, or imaginary orbit, because works are thought-provokes for our deeper and further departures, the drivers of our emotional urge to resolve structures of potential givenness. The subtle layering of small formats is merely a reflection of the primary impulse and the beginning of a cosmic search.

The already well-established and already problematized schematic representations and lattice forms, at some moments are interrupted by clear line strips, that ideally supporting and affirming the ever-present imperfection, because the uniformity of the path through any research work is impossible.

Marko analyzes his space in frames 4d, which is inevitable through his primary and sculptural deliberations, and here he reflects through his intuitive nature of art practice. As he passes, he captures scenes, filters more importantly than the peripheral, experiments on the micro landscape, regenerates the expression of nature through his modulation of thought. Abstract visualization of order and chaos is sublimated in tiny units, regardless of the format selected. At the micro level, based on the unit of measure of nature, objectifies the broader plan, concludes on the basis of the sample. Through the cell, it examines the genetic potential of the atmosphere and environment. The works are not unarticulated sketches, but Marko’s recognizable visual language, the sum of many years of conscious and logical articulation of forms, both in space and on canvas.

“Drawing her own face, Knifer seeks to draw something much more complex than the depiction of physiognomy. In this almost ritualistic repetition of the same process, Knifer realized that his drawings were no longer self-portraits, but an infinite series of the same, or almost the same, rhythmic movements. More precisely, the escalation of monotony,  as he would say much later in describing his meanders. This early discovery was important to the painter and because he realized that he did not want to do a single painting, a work that would be sufficient in itself. Every drawing, just as it will soon be every single painting, gets its full meaning in a series of all other works. Such a rhythmically marked system entails one important substance, and that is time.”